Vandals whitewash a monument to the victims of slavery in France 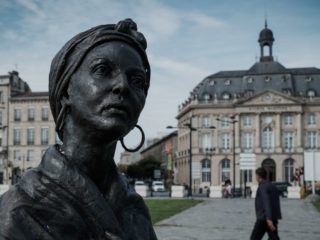 Unidentified vandals ‘whitewashed’ in Bordeaux (France) a monument to the victims of slavery. This Monday morning, the bronze statue of the Ethiopian Modeste Testas, a slave bought by merchants from that French city, appeared covered in white.

“The bust of a black person was repainted white,” declared city councilor Stéphane Gomot, in charge of heritage and memory, who called the attack a “racist and misogynistic act” and assured that the city council would file a formal complaint.

Very surprised this morning to see the statue of Modeste Testas in this way. It’s half covered in white. We’re trying to get more info.#bordeaux#gironde#modestones#LaCleDesOndesCc @SO_Bordeaux@20minutesbord@OEscots@KarfaDIALLOpic.twitter.com/LPEiPM647A

Gomot stressed that in addition to being an attack on an artistic project, vandalizing the statue of the African slave “is an act of denial, an attack on deportees and victims of slavery, an attack on women,” he quotes his words. France 3 Aquitaine.