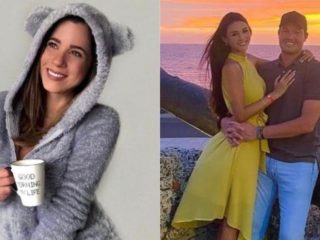 Vanessa Terkes He referred to the recent photograph with which George Forsyth confirmed his romance with Sonia La Torre. The radio host assured that she does not hold a grudge against her ex-husband and even wished him the best with the industrial engineer.

“How beautiful, happiness for them and for all those in love with Peru and the world. I am so happy that I want everyone to be intensely happy, in my heart there is no place for anything other than love ”, Terkes told the Trome newspaper.

Vanessa assured that she can be friends with an ex-partner, but as long as they have behaved well with her.

“If possible. Obvious as long as he has behaved well at the time of farewell. I am a superfriend of Roberto Martínez and Rodolfo de Anda (their ex-partners). The people who add to your life, always close; those that remain, by far ”, commented.

When asked if she is in love, the actress also preferred not to give many details and only said: “I am happy and well cared for, no complaints on the horizon, ha ha ha.”

Days ago, Vanessa Terkes spoke about how she felt after she announced that she had already signed her divorce. “Are you already divorced?” I ask a user to the presenter through a question wheel on Instagram. To which the former congressional candidate replied: “What do you think? Do you think I’d be so happy here if it weren’t? I already signed it! Now, it must be days away, I already feel recontra single, a long time ago ”.

After being officially divorced from Vanessa Terkes, the former Alianza Lima footballer made Sonia La Torre official on social networks, the industrial engineer with whom he has been captured on several occasions.