Vegas Loop: “Teslas in the tunnel” chauffeur the first passengers for a trade fair 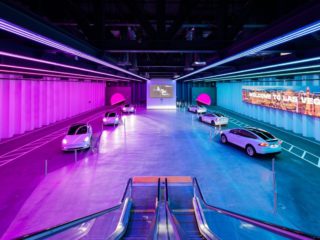 The tunnel transport system under the Las Vegas Conference Center has officially started operating for a trade fair. Teslas transport trade fair visitors and other guests through that of Elon Musks The Boring Company tunnels built between the exhibition halls – initially with drivers and at city speeds of no more than 55 km / h.

The occasion of the opening of the “Vegas Loop” is the concrete fair World of Concrete – one of the first public trade fairs in the desert city since the outbreak of the coronavirus pandemic. Hundreds of trade fair guests took the opportunity not only to be chauffeured to the next exhibition hall, but also to be one of the first to try out the “Teslas in the tunnel”.

The exhibition center in Las Vegas was expanded with the new West Hall with 55,700 square meters of exhibition space. It was originally supposed to go into operation together with the new tunnel transport system for CES 2021 at the beginning of the year. Due to the corona pandemic, the CES only took place virtually. Both have now been officially inaugurated, and Las Vegas has one more attraction.

The current Vegas Loop is limited to three stations, which are connected by two tunnels, each about 1.3 kilometers long. While the two west and east stations are above ground, the central station next to the main entrance to the exhibition grounds can be reached underground and via escalators.

Due to the use of electric vehicles, the tunnels can be built relatively narrow, which makes drilling easier. This also meant that the two tunnels under Las Vegas were already drilled within just six months. Cost point: around 50 million US dollars.

Exhibition tunnel is just the beginning

However, this is only meant to be the beginning. Elon Musk is planning an underground tunnel that runs through the whole of Las Vegas and connects downtown with the “Strip” and the airport in the south. The planning for this “Las Vegas Loop” is progressing, with the hotel chains themselves taking care of their “train stations”. “Wynn” and “Encore” as well as the new “Resorts World” in the north of the strip also want to be connected to the exhibition center. This is to relieve the main street, the “Las Vegas Strip” between the hotels and casinos, which is particularly crowded at events.

However, Musk’s vision also envisaged self-driving Teslas with up to 250 km / h in the tunnels. That remains a dream of the future for the time being. In return, more passengers can be transported. The Boring Company planned with 4400 passengers per hour. The evaluation of the first tests at the end of May showed a capacity of around 5000 passengers per hour for the short commute on the exhibition grounds.