Venezuela: Spain urges the Maduro regime to resume dialogue with the opposition | International 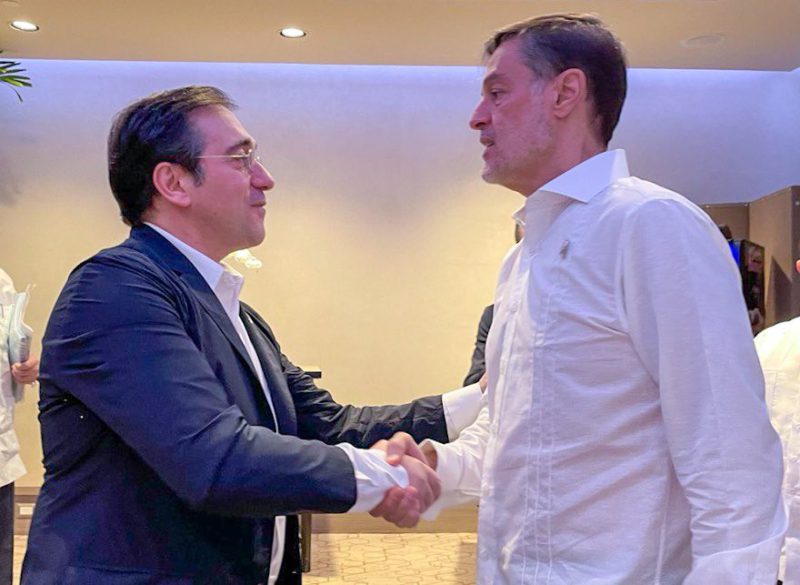 The Spanish Minister of Foreign Affairs, José Manuel Albares, met this Friday in Santo Domingo with the Venezuelan Foreign Minister, Félix Plasencia, with whom he had a “frank and sincere” dialogue. as said by the latter on Twitter. The meeting (the first since Plasencia replaced Jorge Arreaza last August) took place in the run-up to the meeting that the foreign officials of the 22 Ibero-American countries hold in Santo Domingo to elect the replacement of Rebeca Grynspan at the head of their General Secretary.

Much of the conversation has focused on the controversial local and regional elections held last Sunday in Venezuela, in which the candidates of the Maduro regime won 20 of the 23 governorates and 205 of the 335 mayors at stake, in the middle of a strong abstention. The EU Observation Mission has not yet published its final opinion, but in its provisional conclusions it gave one of lime and another of sand, recognizing that “electoral conditions have improved compared to the three previous national elections”, but warning that “structural deficiencies still persist,” such as the arbitrary disqualification of opposition candidates, the abusive use of State resources in favor of the ruling party, unequal access to the media and the lack of judicial independence. This was the first time that opposition parties participated in Venezuelan elections since 2018 and that the EU had sent an observation mission for three decades. The US Secretary of State, Antony Blinken, has already certified that the elections “were neither free nor fair.”

Albares has asked his Venezuelan counterpart to end the practices denounced by the EU mission and to resume as soon as possible the negotiations with the opposition that were taking place in Mexico and were suspended last October, to guarantee that the next presidential elections, unlike those of last Sunday, be “fully free and competitive,” according to diplomatic sources. The Venezuelan Foreign Ministry had previously been “disappointed” by the “value judgments” made by the Spanish Foreign Ministry in a note in which it warned that local elections had not met “democratic expectations.”

Albares has also met with the foreign ministers of Cuba (Bruno Rodríguez), Guatemala (Pedro Brolo), Peru (Óscar Maúrtua), Ecuador (Mauricio Montalvo) and the Dominican Republic (Roberto Álvarez), the latter in his capacity as host. The Santo Domingo meeting brought together 13 foreign ministers from the 22 Ibero-American countries: 19 Americans plus Spain, Portugal and Andorra. Some unusual have even attended these appointments, such as the Cuban.

The succession of Rebeca Grynspan, appointed secretary general of UNCTAD (United Nations Conference on Trade and Development), has generated an unusual interest in an organization that many Latin American countries regularly look down on with disdain. Four candidates have been presented to the General Secretariat: the Foreign Ministers of Guatemala (Brolo), Chile (Andrés Allamand), the former Peruvian Minister José Antonio García Balaúnde and the former Ecuadorian Vice President Rosalía Arteaga.

The latter is the one with the most possibilities, because of its Andean condition (the first two general secretaries of the Segib were a Uruguayan, Enrique Iglesias, and a Costa Rican, Grynspan) and because it arouses less rejection than the foreign ministers in office. The countries of the Ibero-American community elect their general secretary by consensus, so, in the words of a diplomat, “the important thing is not to have many votes, but to have no veto.” It is not certain, however, that today’s meeting will make a white smoke. Otherwise, an agreement would have to be reached before November 2022, when the summit of Ibero-American heads of State and Government is scheduled to be held in Santo Domingo, to avoid that it ends up focusing on the election of the new secretary general and leaving aside issues that are of much more interest to societies where, as the Dominican Foreign Minister has warned, support for democracy is falling: from 63% to 49% in the last decade, according to the Latinobarometer.