Venezuela will seek to include Maduro’s financier in negotiations 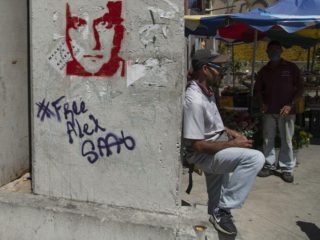 (Bloomberg) – Alex Saab, a Colombian businessman jailed in Cape Verde for allegedly laundering money in his dealings with the acquisition of food for a Venezuelan government program, is awaiting extradition to the United States after losing a series of appeals.

But if Venezuelan President Nicolás Maduro has his way, he will instead board a plane bound for Mexico to participate in political negotiations with the opposition.

At least that was the proposal that Jorge Rodríguez, head of the Government delegation, unveiled on Tuesday in talks with political opponents. Maduro’s allies will send notices to Norwegian mediators, a group of friendly observer nations and the opposition informing them of the decision, he said.

“Alex Saab has been kidnapped in a prison abroad for more than 400 days,” said Rodríguez. The businessman helped Maduro manage a food import plan to circumvent US sanctions, said Rodríguez, calling the businessman a “diplomat.” Saab “meets the conditions” to be a full member of the delegation, he said.

Rodríguez did not explain how the government plans to get Saab out of the Cape Verde jail and there was no immediate reaction from the opposition or mediators.

Last week, the Constitutional Court of Cape Verde rejected an appeal filed by Saab’s lawyers arguing the unconstitutionality of the extradition request submitted by the US, where he faces money laundering charges. Russia, one of the countries that advises the government in the Mexican talks, openly criticized the ruling, arguing that it could affect the negotiations.

Femi Falana, a lawyer for Saab, said the sentence was illegal and influenced by “political considerations” and that the legal team will request a review. Saab’s lawyers had repeatedly claimed that his detention was illegal and politically motivated due to pressure from the US government. If convicted, the businessman could face a life sentence in the US, according to the defense.

Last month, opposition leader Freddy Guevara was released from a Caracas jail where he was being held on dubious charges related to terrorism and treason to participate in the talks. Guevara replaced another opposition politician, Carlos Vecchio, whom the government refused to accept in the negotiations.