Venezuelan gold in the Bank of England: the dangerous colonial jurisprudence that could engender parallel governments to embezzle countries 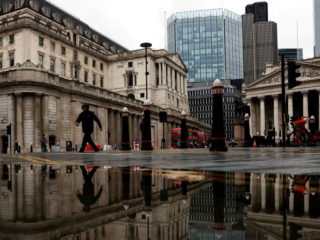 The decision that will soon be made by the Supreme Court of the United Kingdom on the custody of the 31 tons of Venezuelan gold, estimated at more than 1,000 million dollars and held in the Bank of England, could generate jurisprudence on the ultimate authority of international reserves that many nations have entrusted to that country.

It is not only about Venezuela, but about the more than 30 countries in Africa, America and Asia that have their international gold reserves safeguarded in said bank. In fact, according to some calculations, a fifth of the gold of all countries of the world is in London, considered the capital of this precious metal.

In October 2020, the British Justice annulled a previous decision of the courts that favored the ‘interim’ of Juan Guaidó, but basically asking to investigate more about the legitimate authority to withdraw the gold from the Bank of England.

This Monday, the British Government confirmed its recognition of the former opposition deputy, increasing the chances that the Venezuelan gold will not be returned to the state entity that deposited it as a safeguard: the Central Bank of Venezuela. Thus, the precious metal can end up blurred between the English vaults and current expenses of a parallel government that has no headquarters, no territorial or population control.

During this week, the magistrates will be listening to the parties involved to pass judgment. If the five magistrates in charge of deciding on the Venezuelan lawsuit end up taking custody of the gold from the Government of Nicolás Maduro and decide to hand it over to Guaidó – or simply keep it under safekeeping indefinitely (almost three years have passed since Venezuela requested his repatriation )-, could incite the arbitrary creation of ‘parallel governments’ constituted for the sole purpose of accessing control over it.

Already, the Venezuelan Government, in May 2020, proposed that an agreement be reached between the parties and that deposit be used, under the management of the United Nations Development Program (UNDP), in the purchase of sanitary material to face the pandemic. However, so far the Bank of England has refused to accept such a request.

A true colonial legal weapon is being consolidated that puts at risk the international reserves of some 30 countries, which naively trusted the United Kingdom to protect their sovereign resources.

Venezuela is among the countries that have applied the least vaccines in the entire region due to difficulties in accessing the necessary resources, among others, due to the sanctions imposed on the country. However, if the decision of the British high court is finalized, the South American country will not be able to make use of its reservations, which would reveal the callousness of British institutions Beyond the ‘doubts’ they may have about its use by the Maduro government.

What would be consolidating, thus, is a true colonial legal weapon that puts at risk the international reserves of some 30 countries, which naively trusted the United Kingdom to protect their sovereign resources.

The narrative, from now on, of generating this jurisprudence, will be more or less like this. From a colonial perspective, English institutions tell other countries that have entrusted their reserves to English banks: ‘You do not have security to preserve your gold, you pay me to keep it for you, but if at some point the British Administration on duty considers your government illegitimate, then the bank reserves the right to prevent its return for an indefinite time, and even possibly hand it over to a government recognized by the English authorities even though it has no power over the territory, nor the population, nor a headquarters known ‘.

This is the case of Guaidó’s ‘interim term’, to which the European Union (EU) has withdrawn its recognition as a government and has lowered its status as president to ‘opposition leader’. The UN does not recognize him either. Despite this, having been recognized by the British Government seems to have sufficient legal status to prevent returning the reserves to the Central Bank of Venezuela.

From now on, countries in the region will have the same risk, such as Mexico, Argentina, Bolivia, Colombia and Peru, who have gold reserves in English banks.

The operation is very simple, the British Government ignores the authority that put the gold in the vaults of the Bank of England, recognizes a different president and, immediately afterwards, the body decides to keep it in ‘custody’ for an indefinite period of time.

Today, the reserves of some 30 countries that hold their gold in the Bank of England are at risk. The British Government now has power over them and a strong weight to press in one direction or another the decisions of those nations, on pain of losing its sovereign resources.

This decision would not only create dangerous colonial jurisprudence, but would also encourage the adventures of ‘parallel governments’ with no greater power than the money they could access in a European bank.

We could exemplify by imagining that in the denied assumption that Keiko Fujimori decides to proclaim herself president and the British Government recognizes her, then the 34.7 tons of gold in foreign reserves of the Central Reserve Bank of Peru would be in clear risk of ‘being lost’ in the English vaults or to be used by a hypothetical Fujimori government in exile.

If a sentence of this type had been produced before, dictatorships such as that of Jeanine Añez in Bolivia may have preferred to transfer their de facto government to ‘exile’ to try to collect or manage the money of the Bolivian people, Bolivia being a country that also has reserves of gold in foreign banks.

These hypothetical scenarios, hardly credible, serve to contemplate that this decision would not only create a dangerous colonial jurisprudence, but would also encourage the adventures of ‘parallel governments’ with no greater power than the money they could access in a European bank. Although also, this decision may stimulate the countries in question to ask for a gradual return of their reserves, for fear of similar situations.

It is possible that the entire English anti-colonial movement, which broke in forcefully during the past year, is unaware of the colonial mechanisms that today are encouraged from London, a few blocks from where statues of slaveholders and colonizers fell.

He is a sociologist, political analyst and professor at the Central University of Venezuela. He has been the winner of the 2015 Municipal Prize for Literature with his book Give him more gasoline and the Clacso / Sida award for young researchers in 2004. Collaborator in various media in Europe, the United States and Latin America.

The statements and opinions expressed in this article are the sole responsibility of the author and do not necessarily represent the views of MRT.