VIDEO: A woman falls down the escalator after being kicked by a man in the New York subway 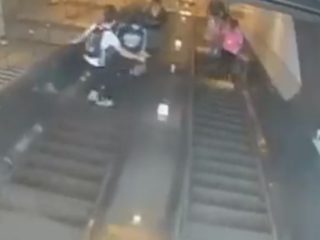 The New York Police Department (USA) is looking for a man who was caught hitting a woman in the chest, causing her to fall down the escalator in a subway station in the Brooklyn district. Although the incident occurred last Thursday, it has not yet been possible to trace the assailant.

🚨WANTED for ASSAULT: Do you know this guy? On 9/9/21 at approx 7:15 PM, at the Atlantic Ave-Barclays Center Station in Brooklyn, the suspect kicked a 32-year-old woman in the chest, causing her to fall down the escalator. Any info? DM @NYPDTips, or anonymously call 800-577-TIPS. pic.twitter.com/j6yFToIlvU

In the tape, published on Twitter by the police body, the attacker is seen to overtake the victim and then lean against the railings and kick her in the torso.

The Police indicated that the attack took place as the culmination of a verbal altercation between those involved. In her fall, the woman suffered cuts and bruises on her back, but refused to receive medical attention.