VIDEO: Biden crosses himself after referring to Trump during a campaign event 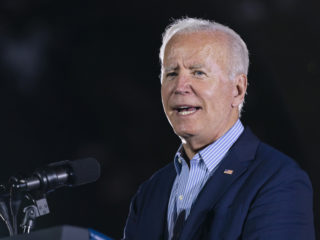 US President Joe Biden made the sign of the cross gesture after referring to his predecessor, Donald Trump, during a campaign event held this Monday in Long Beach (California, USA), with reason for the special election on Tuesday to revoke the mandate of Governor Gavin Newsom, as seen in a video released by local media.

“You all know that last year I had the opportunity to compete against the real Donald Trump,” the president said just before crossing himself, which it started laughter and applause among those present. “Well, this year the main Republican running for governor is the closest thing to a Trump clone I’ve ever seen,” he added in reference to Larry Elder.

“It’s going to reverberate across the country and, frankly, it’s not a joke, across the world,” added the tenant of the White House in relation to the election.

This September 14, Californians are called to answer two questions: if the actual gobernador Gavin Newsom, from the Democratic Party; and who will replace him. Should he win ‘No’ on the first question, Newsom will end his term in January 2023.

Trump said last week that he would knock out Biden if they met in a boxing match, adding that it would probably be his easiest fight, because “he would go down very, very fast.” He also ruled out a hypothetical fight with a professional boxer because it could be “very dangerous.”