VIDEO: Four police officers beat a teenager suspected of robbery to the ground in a California store 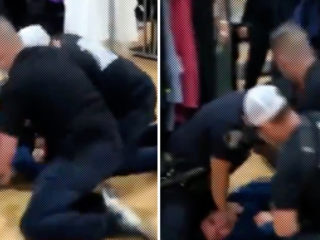 Four police officers from the American city of Glendale (California) have been suspended from service after a video was released in which they appear hitting and kicking a teenager suspected of robbing a sporting goods store, reports CBS LA.

The event took place last Saturday at the Glendale Galleria shopping center. As officers tried to arrest the 17-year-old, a fight broke out in the store in which officers used force, declared the local police.

Images provided to CBS LA show three plainclothes officers hitting the suspected teen on the ground. Then a fourth officer in uniform appears on the scene and kicks the child in the face. According to the outlet, in the unedited version of the video, the young man can be heard saying, “I can’t breathe,” while one of the officers tells him to stop resisting.

NEW: Video obtained by @CBSLA shows a Glendale Police officer kicking a man in the face as he’s being taken into custody. This happened Glendale Galleria over the weekend. We showed @GlendalePD the video, which they’d not seen before, and an investigation has been started #CBSLApic.twitter.com/GjUp51ntrn

One of the witnesses, who did not reveal his identity, recorded the incident with his cell phone and spoke to the channel. “The officer who wasn’t even there to begin with ran into that situation and as soon as he arrived, he decided ‘I’m going to kick this kid in the face,'” he said.

The adolescent suffered eye and head injuries, according to reports. All four officers involved in the arrest were placed on administrative leave after CBS LA showed the video to Glendale Police.

Melissa Navarette, the victim’s sister, told the outlet that the recording was “really difficult to watch.” “It traumatized us. We have the whole video in our heads,” said the woman.

The teenager was charged with petty theft and resisting arrest, while the stolen merchandise could be recovered. The Glendale Police Department said it will continue to investigate what happened.