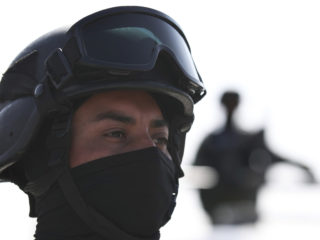 Surveillance cameras captured the moment when armed men, wearing the uniform of the Special Operations Unit (UNOPES) of the Mexican Navy, released José Alfredo Hernández Campos, alias ‘El Calamardo’ or ‘Metro 27’, from the headquarters of the Reynosa Ministerial Police, in Tamaulipas, located a few kilometers from the US border. He is one of the leaders of ‘Los Metros’, a faction of the Gulf Cartel.

The incident occurred on July 13, just 24 hours after being arrested. The news about his release then circulated and it was reported that the armed command that released him consisted of 30 men. However, the videos showing these individuals, presumably members of the special forces, carrying out the operation have just come to light.

In the audiovisual material, compiled and published by VICE, it is appreciated how at least four men arrive aboard a white vehicle, they get off it with their weapons and enter the headquarters of the Ministerial Police, without encountering resistance from the local Police.

The armed men subdue some people who were in the place on the ground and then go in and out through the doors of the building. Finally they lead an officer to the cell where Hernández Campos was, he opens it and they escape.

After the release of alias ‘Metro 27’, there were blockades and clashes with the security forces in Reynosa, to prevent the drug boss from being recaptured.

Likewise, in August it was known that six agents of the Investigative Ministerial Police were linked to the process by a control judge for the escape of Hernández Campos.

Finally, alias ‘Metro 27’ did not survive long after the escape, since in early September he was shot down during an armed confrontation with the military on the borders between the municipalities of Camargo and Díaz Ordaz, the State Attorney’s Office reported.