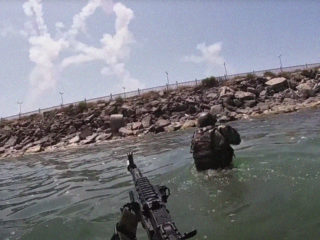 The Marines of the Caspian Flotilla rehearsed an episode of the military sports festival dedicated to the Day of the Russian Navy.

In the course of training, the ‘black berets’ demonstrated their ability to seize a bridgehead on the coast in order to suppress enemy positions, according to the Ministry of Defence.

Then, on the coast without prior preparation, the main units of the Marines, together with their floating combat vehicles, were disembarked from the boats of the Serna-type project 11770.

After leaving the deck of the amphibious assault ships, the armored personnel carriers crossed some 200 meters of the water surface, harassing simulated enemies with large-caliber machine guns.

Marines will demonstrate their water landing and maneuvering skills in public on July 25, on the occasion of Russian Navy Day, which will also be celebrated in the country’s four fleets: Black Sea, Baltic, North and the Pacific.