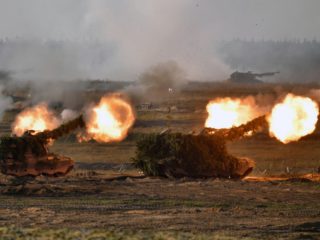 Russian robotic tanks were launched on Monday firing anti-tank missiles and flamethrowers, while their operators were remotely controlling them from distances safe for humans during large-scale exercises Západ-2021, attended by the President of Russia. and Commander-in-Chief, Vladimir Putin.

At the beginning of the video of the drills published by the country’s Ministry of Defense, two models of unmanned combat vehicles appear.

It is the Uran-9, capable of destroying enemy armored material at a distance of up to 5,000 meters with Ataka anti-tank guided missiles and also equipped with automatic cannons and Shmel flamethrowers.

The other unmanned combat vehicle is Nérejta, conceived for reconnaissance and fire support operations. It has a 12.7-millimeter machine gun and a 30-millimeter grenade launcher.

In April of this year it was announced that the Russian Army will form its first unit equipped with attack robots. It will include five Uran-9 robotic systems, or 20 combat vehicles.

Meanwhile, the Uran-9 systems have already been tested in counterterrorism operations in Syria.