VIDEO: The moment of the deadly collapse of a building on a highway in South Korea 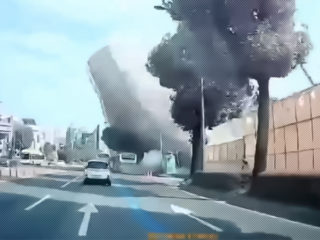 A dash cam on June 9 recorded the exact moment when part of a five-story building that was to be demolished collapsed onto a highway in the South Korean city of Gwangju. The avalanche of debris clogged all six lanes of the road and crushed a bus, killing nine people, all of them over 60 years old, and wounding another eight.

Several vehicles narrowly avoided being crushed by the concrete structure, including the very car in which the camera that recorded the scene was installed.

None of the workers working on the demolition of the building was injured, as they had escaped from the place by detecting signs of an imminent uncontrolled collapse and without giving notice to anyone else, according to local media. Authorities have arrested the CEO of the company in charge of the shoot-down for fail to comply with the relevant security measures.