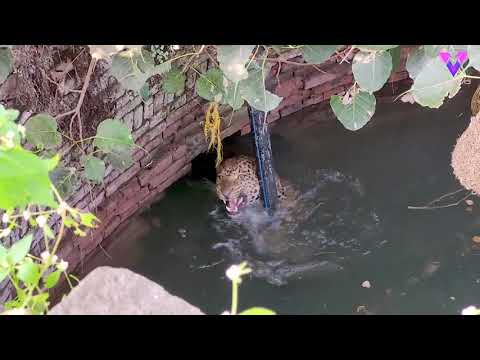 Viral video of the rescue of a leopard that had fallen into a well in India – MAG.

The tense rescue of a leopard that had fallen into an open well in the town of Beslar, in Maharashtra, western India, and was on the verge of drowning, was recorded in video.

A local farmer saw the big cat struggling to stay afloat as he struggled to avoid drowning in the water and immediately alerted the Indian Forest Department and Wildlife SOS, a non-profit charity that rescues and rehabilitates endangered wild animals throughout India, which also called for reinforcements.

The footage shows the leopard clinging to a pole first as its rescuers lower a cage. The moment the cage is opened, the exhausted big cat quickly leaps onto it.

The animal was later transferred to the Manikdoh Leopard Rescue Center for medical attention and will remain there under observation until it is deemed fit for release.

The leopard is a strong feline that lives in sub-Saharan Africa, North Africa, Central Asia, India, and China. In some places they are threatened.

This animal is comfortable in the trees, it is a nocturnal predator that hunts antelope and deer. If there are human settlements nearby, it also hunts dogs and even people, according to National Geographic.