We can plan for the cross of the Valley of the Fallen: smash it and distribute it on the esplanade

The so-called law of Democratic Memory of the Government of Pedro Sánchez leaves in the air the future of the cross of the Valley of the Fallen. The Executive has not clarified whether or not it will proceed to demolish it in the future, which, in any case, as explained by the new Minister of the Presidency, Felix Bolaños, would be collected in a later project. But Podemos – now partners in the social-communist Executive – does have clear ambitions about this monumental complex, ordered to be erected by the dictator Francisco Franco in 1940 to house victims of both sides of the Civil War.

In 2018, the party, then led by Pablo Iglesias, wanted to go beyond the demolition of this symbol of reinforced concrete, one of the largest crosses in the world with its 150 meters high and 46 meters of arms.

In a report titled Exhume the Franco regime. Let’s recover the Valley of Cuelgamuros for democracy, directed by the historian Jordi Guixé, Podemos illustrated his plans to “redesign” this space with different photographs.

In the images you could see the shattered cross and its remains, scattered around the esplanades of the monumental complex. The report presents it as a “comprehensive intervention” on the Valley of the Fallen, with “demolition of the cross and dignification treatment of the ruin for its public exhibition in the esplanades ». 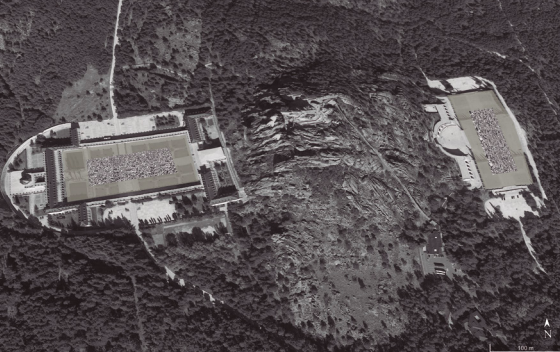 The objective of the training, as explained, is that the “Heavy residue” resulting from the demolition of this symbol will serve as a new monument «of dignity and respect for the victims».

According to Podemos, scattering the remains of the cross on the ground symbolizes “a reflection on the triumph of democracy (finally…) about the dictatorship ». However, the report indicates that it is one “idea” of the many that could arise from a process of collective debate and is committed to opening an international public contest – in which associations of historical memory and victims can participate – to collect the different proposals. For Podemos it is «fundamental» that space «is devoid of Francoist symbolism both inside and outside, including the union of the cross and the sword ”.

In addition, the party defends that “it is desecration is essential of space and its total recovery, including the basilica ”. And for this, “the 1979 agreements between the Spanish State and the Holy See, which grant control of the basilica to the religious, should be reviewed. This would not entail separating and eliminating the religious symbols that are currently in the place, but rather giving the National Heritage full control over the space ”, they state in the documents.

With the Democratic Memory Law, approved this Tuesday by the Council of Ministers and sent to the Congress of Deputies, the Government aspires to «resignificar» the Valley of the Fallen.

For this, among other measures, the remains of the Falangist leader José Antonio Primo de Rivera will cease to be in a «preponderant place» of this mausoleum.

The law also indicates that the extinction of all foundations that defend Francoism, exalt the coup d’état of 1936 or the dictatorship and apology of its leaders will be pursued, with contempt for the victims and incitement to hatred. The Government aspires to outlaw the Francisco Franco Foundation.