“We can write our own history”: the Argentine documentary about the workers who faced (and defeated) a transport monopoly 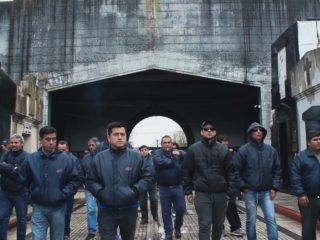 “Our ruling classes have always tried that we have no history, doctrine, heroes, or martyrs. Each fight must start over, separate from the previous fights. The collective experience is lost, lessons are forgotten. The story thus appears as private property, whose owners are the owners of all other things. “The phrase belongs to the Argentine journalist Rodolfo Walsh, but is taken up in the voice of Santiago Menconi, a worker on bus line 60, one of the most popular and emblematic of Buenos Aires.

Menconi is also the narrator and protagonist of ‘The Sixty, chronicles of a workers ‘struggle’. This documentary made by the collective Silbando Bembas tells how the experiences of union organization manage to prevail against the employers DOTA, an automobile transport corporation that manages more than 72 bus lines in the country.

“It is Friday, September 9, 2016 in the new head of Barracas. Drivers and mechanics finished breakfast and are preparing to return to their posts. David Ramallo has a task ahead of him: to fix the brakes of a bus supported by an elevator. every day, he gets dragged under the unit, “says Menconi at the beginning of the film.

Ramallo he was crushed by the same vehicle he was trying to repair. That fact rekindled the conflict that had been registered in 2015, when the workers of the 60 faced a ‘lock out’ of the owners of DOTA and avoided massive dismissals, through an extensive strike and the release of the ticket for the passengers of the 60.

The tragic death of that colleague was denounced by the union commission as a ‘labor murder’ due to the negligence of the company and the control bodies, since the workers had warned on several occasions that there was faults in the elevators.

The film was founded on two fundamental columns: the audiovisual accompaniment of the militant collective Silbando Bembas to the struggles of the 60, and the texts about those workers’ experiences that Santiago Menconi wrote daily, which were compiled and published in the book ‘Sixty-one: chronicles of a lock out’.

“It is necessary that workers write our history and also that we film it, that we go to the cinema and occupy the different media spaces to tell what we are,” explains to MRT Menconi, whose father retired as an employee of Line 60 at the age of 31 of antiquity.

For the also journalist and author of ‘Sesentazo’, the making of this new film is important because it deals with experiences that are not usually on the agenda of the big media, or are generally “badly taken, misrepresented or often made invisible”.

Menconi highlights that the work functions as a key tool for debate and political transformation at all levels, mainly due to the result of a grassroots union organization and resistance, opposed to the leadership of the Union Tranviarios Automotor (UTA), to the that they define as the “union bureaucracy”.

“The documentary realizes that The independent experience of the workers can bear fruit as in our case, which at that time we fought and won against the layoffs, “says Menconi.

“A material to share with the working class in general”

Silbando Bembas was born as a militant film collective project at the end of 2007, among students of the Social Communication career at the University of Buenos Aires (UBA).

“From the collective we put the audiovisual tool at the service of different popular struggles of a trade union, socio-environmental, gender, human rights and against the easy trigger, among others. That is how we approached 60, where the comrades have a body of anti-bureaucratic delegates with a long history, very supportive of other struggles “, describes Sebastián Zanzottera, one of the film’s directors.

“When the conflict of 42 days began, with the first 3 layoffs, we made a material and began to see the size and strength of this struggle, which escalated a lot with the workers not charging tickets, a measure skillful that hit the company directly and did not affect the user public, “says Zanzottera to this medium.

This measure resulted in the dismissal of another 53 workers and an employer ‘lock out’ “that seriously affected the service, while the workers remained on the job. strike and permanent assembly; they made camps, popular pots and solidarity collections. They also cut roads and were repressed.

“We supported making ‘spots’, going to record almost daily, and in the end we realized, especially with the triumph, that there was a very important material to share this experience with the working class in general”, says the filmmaker and activist of Whistling Bembas.

“When Santiago took the book out, we said, well, here’s the movie. Let’s amplify this,” he says about the gestation of ‘The Sixty – Chronicles of a Workers’ Struggle’.

The film will be released virtually this Thursday, July 22, on the platform at Cine.ar. And it will participate in the documentary film festivals Dock-ket in Ecuador and Aricadoc in Chile.

“We would like it to serve to learn that workers can write our own history “, if ilusiona Zanzottera.