WFP: Food insecurity has almost doubled in Honduras due to the pandemic 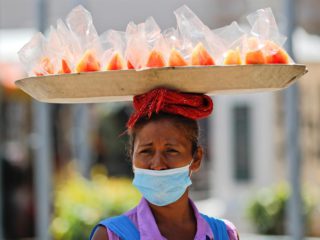 Tegucigalpa, Sep 14 (EFE) .- The number of food insecure people has almost doubled in Honduras, from 1.8 million prior to the pandemic and hurricanes Eta and Iota to 3.3 million today, a figure that may increase to 4.4 million by the end of 2021.

“Before (the) covid-19 we had 1.8 million people in food insecurity, now 3.3 million,” said this Tuesday in an interview with Efe via Zoom the deputy director of the World Food Program (WFP) in Honduras, Etienne Labande.

More than 600,000 people in Honduras are in “severe food insecurity,” according to official figures cited by Labande.

Food insecurity prior to the Covid-19 crisis and the effects of Eta and Iota affected more people in rural areas, but now it is “much more present” in urban areas, underlined the expert, a French national.

He noted that the lockdowns ordered to face the pandemic in 2020 affected much more people who work in the informal economy or lost their jobs.

The Central American country, according to WFP estimates, lost around 250,000 jobs due to the pandemic, mainly in large cities.

The recovery of Honduras will take “between two and three years,” so that, by the end of 2021, according to the WFP, the country could have “4.4 million people in moderate food insecurity,” he added.