What can happen to Keiko Fujimori’s unusual request for annulment against 802 polling stations in Peru? 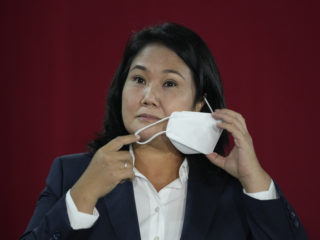 The presidential candidate of Fuerza Popular, the right-wing Keiko Fujimori, accused Peru Libre on Wednesday night of implementing systematic actions to break the popular will, a statement that was immediately rejected by the electoral authorities.

Through the nullity actions at 802 polling stations nationwide for alleged irregularities and the monitoring of 1,200 electoral records observed, Fujimori assured that there were some 500,000 votes at stake that should be analyzed by the National Elections Jury.

“These actions demonstrate the systematic intention of Peru Libre to break the popular will,” said Fujimori when the National Office of Electoral Processes (ONPE) reported 99.041% of the minutes posted, which granted partial victory to the leftist candidate of Peru Libre, Pedro Castillo, for an advantage of more than 73,000 votes.

The National Elections Jury (JNE) expressed that Fujimori’s request was extraordinary for the Peruvian system.

“The Peruvian electoral system is thinking about things of very little dimension in relation to the appeals (…) What is happening now is extraordinary“, said the president of the JNE, Jorge Luis Salas, in interview with RPP Noticias.

The process establishes that the Special Electoral Jury has three days to call a hearing and resolve requests for invalidity. In the following three days, the political bodies can file challenges. And subsequently, the JNE has another three days to issue a decision.

“If 10 or 15 causes were raised there would be no problem in solving them promptly. But if it were raised in a considerable number, I suppose the three days could be a bit narrow,” Salas said.

However, the annulment appeals announced by Fujimori represent a considerably high number. Salas recalled that during the general elections of 2011 six nullities. While in the 2016 elections, the applications increased to a total of 26.

“Nobody would like three-minute resolutions with the material impossibility of analysis,” said Salas.

In his Twitter account, Tanaka addressed the different scenarios under which, hypothetically, the fraud could have been committed. In the first, the professor from the Pontifical Catholic University of Peru (PUCP) ruled out the possibility of a massive presence of activists and representatives of Peru Libre who would have replaced board members who arrived late.

However, he said the political party accredited few representatives. In addition, Tanaka clarified that the minutes with challenged votes were about 470, and in each of them “only some votes are challenged, no more.”

party is very precarious; An indicator of this is that few officials were accredited, concentrated in Lima, like FP. Note that the minutes with challenged votes were about 470, and in each record only some votes are challenged, no more. If the “fraud” does not go there, it would have to (2/7)

“If the ‘fraud’ does not go out there, there would have to be a collusion between the polling station members ‘taking advantage’ of the absence of opposing representatives or observers; theoretically it could occur, but to limit that from happening the polling station members and their alternates they are chosen by lot. And once they fill out the minutes, the votes are destroyed and the discussion ended there, “said the political scientist about the second hypothesis.

Regarding the 86,480 records processed by the National Office of Electoral Processes, Tanaka stated that it is usual to find irregularities that are resolved on the fly.

“The ONPE found about 1,300, which it has been solving, now there are about 442. Could there be any machinery behind the minutes with problems? Very improbable“, he pointed.

Instead, Tanaka stated that it would be “more credible” for the minutes to have inconsistencies in the information (poorly signed or filled out), but it would be the effect of having board members chosen by lottery and participating in “a long and tense scrutiny”. who end up filling out these documents after a twelve-hour shift.

“The grounds for annulment are very specific and the requests of Fuerza Popular do not seem to correspond to them,” said Tanaka.

In this sense, the political scientist affirmed that the Peruvian electoral system “has many guarantees against the possibility of fraud” and that it contemplates the right to request the nullity of acts.

Nevertheless, “a democratic organization does not abuse that right“Tanaka concluded about the resources announced by Fujimori and Fuerza Popular.

In the course of Wednesday’s recount, Human Rights Watch made a called to accompanied by “serious evidence” any fraud report.

“In Peru, as in any democracy, electoral results must be respected. Any allegation of fraud must be accompanied by serious evidence,” Human Rights Watch director for the Americas José Miguel Vivanco wrote on his Twitter account.

Pending the closing of the count, the president of Argentina, Alberto Fernández, congratulated Castillo “for his eventual victory in the ballot for the presidential elections in Peru.”