What was missing: Spain is whistled by Kuipers, the referee who led our only loss to Slovakia 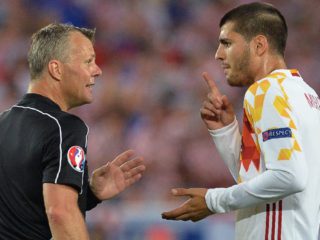 The dutch Björn Kuipers has been the arbitrator designated by the UEFA to whistle the match that will measure on Wednesday at 6:00 p.m. at Spain Y Slovakia in the La Cartuja Olympic Stadium. He will be accompanied on the bands by Sander van Roekel Y Erwin Zeinstra. The fourth referee will be the French Stephanie Frappart, which was already in the clash of Spain against Poland. On the other hand, from the VAR the collegiate will act as principal Pol van Boekel, also from the Netherlands and as AVAR will be Kevin Blom, Christian Gittelmann y Bastian Dankert.

Kuipers is an old acquaintance of the Spanish team. The Dutchman has whistled five matches of the national team with a baggage of one win and four losses. The last time he crossed the path of the national team was at the 2018 World Cup, when the team led by Fernando Hierro fell on penalties against Russia. In 2014, in a qualifying match for Euro 2016, he whistled the only defeat that Spain has suffered against, precisely, Slovakia.

In France 2016 he led the defeat of Spain against Croatia on the last day of the group stage. Spain’s last lost match with this referee was in the 2013 Confederations Cup final, when the National Team lost 3-0 to Brazil in Maracanã. On the other hand, the only victory came against Italy at the Santiago Bernabéu. The national team was gambling its presence in the World Cup in Russia and gave an exhibition winning 3-0.

The memory of Lisbon

Slovakia has better memories of Kuipers, as he has won both matches in which he has whistled them. In addition to the victory against Spain, they also beat Northern Ireland in qualifying for the 2018 World Cup in Russia.

Trained in business administration and owner of supermarkets and hairdressers in his hometown, he has been international since 2006. He is one of the most valued referees by UEFA and was in charge of directing the 2014 Champions League final that faced Real Madrid and Atlético. The whites won that match 4-1.