Home
News
Which countries have detected the omicron variant in Latin America and what measures did they implement?

Which countries have detected the omicron variant in Latin America and what measures did they implement? 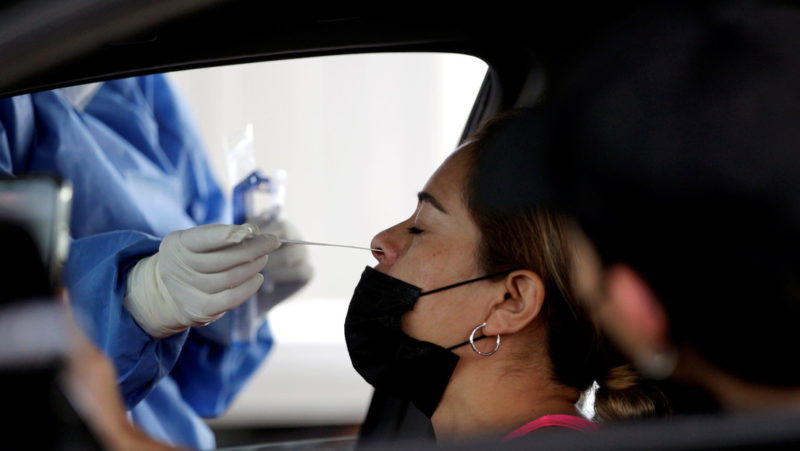 The omicron variant of the coronavirus has so far been detected in four Latin American countries: Brazil, Mexico, Argentina and Chile. Thus, the governments of the region have responded with air restrictions to African countries and greater health surveillance.

The first Latin American nation to confirm the presence of the B.1.1.529 strain in its territory was Brazil. On Tuesday, November 30, the health authorities reported the first two positive cases of omicron after testing two citizens – a 41-year-old man and a 37-year-old woman – who entered Sao Paulo from South Africa.

The following day, the government of Sao Paulo confirmed a third case after testing a 29-year-old traveler who arrived in the South American country from Ethiopia. On December 2, other people infected with variant B.1.1.529 who traveled from the same African country were identified.

By Friday, December 3, Brazil had a total of six recorded cases of the omicron variant after the Rio Grande do Sul state Health Department confirmed that a woman resident of the city of Santa Cruz do Sul had tested positive for covid-19, who developed a fever after returning from South Africa.

Since Saturday, November 27, Brazil has imposed air restrictions on six African countries: Botswana, Eswatini, Lesotho, Namibia, South Africa and Zimbabwe. “We are going to protect Brazilians in this new phase of the pandemic”, pointed the Chief of Cabinet, Ciro Nogueira.

Meanwhile, the authorities of the cities of Sao Paulo, Rio de Janeiro, Recife (Pernambuco state), Salvador (Bahia) and Fortaleza (Ceará) announced the suspension of year-end celebrations to avoid agglomerations, according to reported the Brazilian News Agency.

This Monday, December 6, a meeting is scheduled between specialists from the National Health Surveillance Agency (Anvisa) of Brazil to discuss the possibility of requiring the vaccination passport to those who wish to enter the territory, a measure opposed by the nation’s president, Jair Bolsonaro.

Ómicron in Mexico, Argentina and Chile

Mexico was the second country in the region to report a case of this variant. The Ministry of Health confirmed on December 3 that the sample carried out on a 51-year-old person of South African origin, who arrived in the territory on November 21, had been positive.

“To date, our country has identified the circulation of variants of concern, called alpha, beta, gamma, delta and omicron“, detailed the Ministry of Health of Mexico in a press release.

After confirming the first case of the omicron variant in the territory, the Mexican health authorities reiterated their rejection of “border closure” and to “blocking of persons or property”. In this way, there is only the guideline of limit the “operation of economic and social activities” at 75% of the capacity of the gauges, without any type of imposition.

On Saturday, December 4, the Valparaíso Regional Ministerial Secretary of Health confirmed the first case of the omicron variant of the coronavirus in Chile. It was a person who entered the territory by air from Ghana.

Likewise, the head of Health of the Antofagasta region, Javier Mena, reported This Monday there was another person in quarantine who was suspected of contagion because he had contact with the first case detected.

On December 1, Chile prohibited the entry of non-resident foreigners who had spent the last 14 days in South Africa, Zimbabwe, Namibia, Lesotho, Botswana, Esuatine or Mozambique.

Likewise, Chilean and foreign residents who visited any of the seven African countries must undergo a PCR test at the point of entry and comply with a seven-day quarantine, according to reported the Chilean Government.

Meanwhile, Argentina confirmed the first case of variant B.1.1.529 of the coronavirus this Sunday, December 5. This is a 38-year-old person who traveled to South Africa for training and returned to the territory by air, after making a stopover in the United States.

Therefore, the Argentine Ministry of Health updated the restrictions on the new variant. Thus, he decreed that any person who comes from or who has visited the African continent must meet the following requirements:

“It is likely that other countries will begin to detect this new variant soon,” warned on December 1, the director of the Pan American Health Organization (PAHO), Carissa Etienne.

In this context, Peru, despite not registering positive cases of the omicron variant, imposed restrictions on land borders with Bolivia, Colombia, Brazil, Ecuador and Chile. In addition, the authorities decreed that people from Africa, or nations with community transmission of this strain, should accredit the complete vaccination scheme.

The island’s Ministry of Health established that people who visited these nations should have a negative result from a PCR test In the 72 hours prior to the trip, present a complete vaccination schedule upon entry to the country, take a PCR sample upon arrival, and undergo a mandatory quarantine for seven days in a hotel destined for it.

In contrast to the restrictions announced in Peru, the Bolivian Minister of Health, Jeyson Auza, reported this Monday that the Andean nation defined that, for now, “a border closure is not recommended“.

For its part, Colombia decree, as of December 1, that citizens must present their vaccination card against covid-19 as a requirement to enter “face-to-face events of a public or private nature”.

On air restrictions, the head of the Directorate of Epidemiology and Demography of Colombia, Julián Fernández Niño, pointed out that “the closure of borders is not an effective measure to prevent the spread of new variants within a country“.

“It is a measure that is not effective, but it is also not sustainable over time, and has great social impacts”, added the official of the Colombian Health portfolio.

While more and more Latin American countries confirm the presence of the omicron variant in the territory, PAHO made a called to the governments of the continent to “increase vaccination coverage against covid-19 ” and to strengthen “public health measures that reduce the transmission of the SARS-CoV-2 virus.”