Who is Emma Coronel: everything you need to know about ‘El Chapo’ Guzmán’s wife 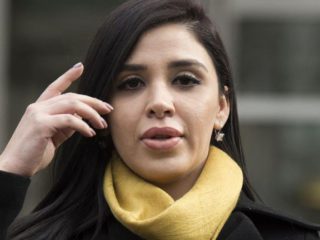 After what Emma Coronel, the wife of the Mexican drug lord Joaquin ‘El Chapo’ Guzman, decided to collaborate with justice and plead guilty to the charges of conspiracy to distribute illegal drugs, money laundering and commercial deals with the Sinaloa Cartel, in addition to having admitted that she plotted to help her husband escape from a prison in the country Azteca in 2015, the penalties he would receive would be reduced.

For the drug distribution charge alone, the 31-year-old woman, who was intervened in February, could face a sentence life imprisonment, while for the other two he would spend 20 and 10 years respectively in prison. However, by accepting his responsibility, according to the convicting laws of the United States, he would spend between 9 and 11 years in jail.

Due to the uproar that the former beauty queen’s guilty plea has caused, we let you know everything you need to know about her.

Emma Coronel Aispuro was born in San Francisco, California, on July 2, 1989. He grew up in Angostura, a remote town in the state of Sinaloa known as the “Golden Triangle” of drug trafficking.

Journalists Anabel Hernández and José Reveles assured that she was the niece of the late drug lord Ignacio ‘Nacho’ Coronel Barrera, one of the highest leaders of the Sinaloa Cartel along with ‘El Chapo’ and Ismael ‘El Mayo’, but the woman denied it. , published BBC.

Although he assured that his family dedicated himself to agriculture, his father Inés Coronel Barrera and his older brother Inés Omar are sentenced for being linked to activities of the Joaquín ‘El Chapo’ Guzmán cartel.

When she was 17 years old, Emma saw ‘El Chapo’ for the first time during a celebration in La Angostura. They talked and began to meet, he gave her gifts and was a retailer, winning her heart; By then, Joaquín Guzmán was one of the most wanted men in Mexico and America.

After meeting for the first time with the drug trafficker in 2006, the young woman signed up to participate the following year in the beauty pageant of the Local Festival of Coffee and Guayaba in Canelas, Durango. To do this, each contestant had to hold a party in honor of his candidacy and hers was on January 6, 2007. That day, Guzmán Loera brought a large number of armed men and publicly announced that he wanted to marry her. Later, she was crowned as the queen.

When Emma came of age they were married. The wedding was in a church on July 2, 2007 and the party was intimate, denying that there were politicians at the event. According to Mayo Zambada, they never married.

“What won me over about him was his talk, his way of treating me. He did not bring me great gifts or great things, but he wins people over by his way of being “, he told Hernández in an interview published in the weekly Proceso in 2016.

After marrying ‘El Chapo’ he went to Culiacán, Sinaloa. In 2011, she gave birth to twins María Joaquina and Emaly Guadalupe. Since her husband was extradited to the United States in January 2017, she has not been able to live with him.

Before Coronel was captured, he had planned to launch the clothing line ‘El Chapo Guzmán’. Once in prison, he spent his time reading novels.