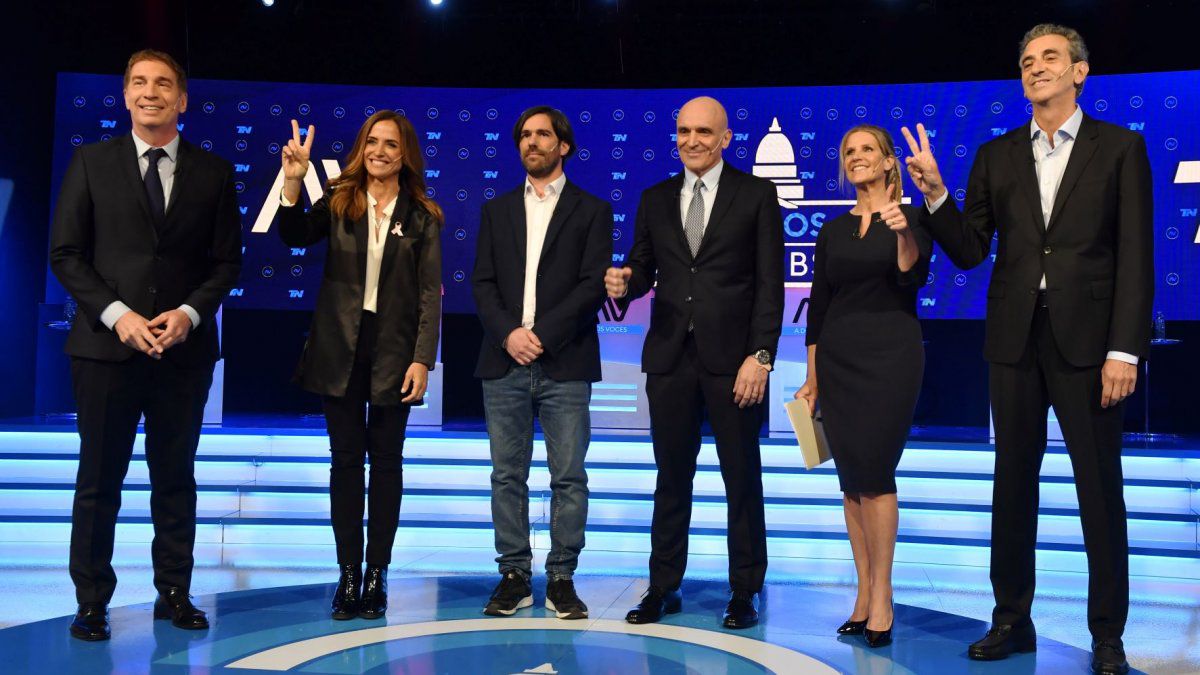 In the previous one, it could be thought that each of the candidates could have some objective:

So far, the theory. That candidate or candidate who developed the correct strategy and who managed to implement it, can be considered the winner.

How did the candidates really fare in the debate?

It was from less to more. He was tough at times. Too coached, as they recognized in their own environment.

Little by little he let go. When he spoke of the pandemic, he mentioned it to Manes. Appointment to bring water to your mill. It was hard at times with Tolosa Paz: he criticized that they give away refrigerators in exchange for “dignity.”

And he defended the management of the City and that of Vidal. Little praise for Macri’s management. He did not win, he did not lose. He made no mistakes. It is not a small thing for a candidate who is winning with what is fair.

At times It seemed that he spoke only to Cristina and hard Kirchnerism. Several times he mentioned Macri’s court cases and the over-indebtedness (“Does anyone know where Pepín is?” He wondered).

He criticized Larreta again (“they put the lives of Argentines at risk”) and tried to match Santilli to the Head of Government (“It is clear that Santilli does not care about the Province but about the presidential career of his political boss”).

Unlike Santoro in the City debate, he did not self-criticize. When they mentioned the government scandals (VIP vaccination, Alberto’s toast) he hardly said they were “Things that no longer make sense” and accused Together for Change of just thinking about “Gambling, speculation and Panama.” Talk to Cristina again.

With that strategy he did not lose, but did not win new voters. Perhaps it will improve the look that other members of the space have on them.

By the way, the best The Tolosa Paz debate was the composition of the platform that accompanied it: two national ministers (Katopodis and Zabaleta), three provincial ministers (Martín Insaurralde, Leo Nardini and Cristina Álvarez Rodríguez) plus Teresa García and Malena Galmarini. A necessary unit show in a Peronism in crisis.

He improved his debating technique. He acknowledged that it was not a good strategy in the last debate to hold a minute of silence due to the crisis in Ecuador. “It does not adapt to television times,” he acknowledged.

He had some luck. In the raffle he had to be in the middle, a central place. He was also in charge of asking for the floor to start the free minutes.

Understood that he had to confront Espert to capture the angry vote. That is why he focused mainly there without neglecting the fight with the Government: the left vote cannot be given to the Frente de Todos. “We must stop the hand of companies that upload food,” he shouted; “Capitalism has an obvious responsibility for the pandemic.”

He mostly confronted Espert. On the one hand to subtract votes from him. On the other to show itself as the best option to stop the advance of the right.

It did not go as well as Myriam Bregman In the past week. But he was one of the winners of the night.

Input he was aggressive, going to look for voters and to confront especially with Tolosa Paz and Del Caño. He learned from Milei’s mistakes the week before. Although they are not part of the same space, they represent the same ideological segment.

He understood that he had to confront only the left and focus on the economy and a bit of insecurity. “The company, for me, to do what it wants with the workers”, he told Del Caño about labor rights.

“In a normal country, Fernández would not be President”, opined on the handling of the pandemic.

“They say stupid things, they have to teach economics from the garden,” he said in another part of the debate.

Perhaps, at times, he was too aggressive. But he managed the times of the debate focusing on confronting “the left.” He ignored Hotton and Randazzo. He hardly spoke to Santilli.

Only on one occasion did he get out of the script: when it was the turn of the questions and he fought with the production of the program. It was his weakest point. But it was one of the debate winners.

It was practically blurred. Rare in a man used to debates. He was Cristina’s interior minister, provincial chief of staff, a pre-candidate for President… It shouldn’t be a place for lukewarm people.

But Randazzo he practically did not participate in the debate. In the first topic (“Institutional quality, Security and Justice”) he did not speak, except in his set minutes.

At times I could not find the camera, it was unclear whether he wanted to speak or not. In many sections he spoke in technical language, describing legal reforms incomprehensible to most of society.

When it came to talking about a pandemic, he mentioned that he was going to propose a comprehensive health plan or promote the zero alcohol law. He spoke little and nothing of the subject that summoned him.

He was lackluster with questions and answers with Cynthia Hotton.

It was like he was not. He showed up to comply. It was striking that in the final greeting, at the end of the debate, he posed making the Peronist V. Rare for a Peronist candidate who was in charge of hiding the liturgy throughout the campaign. If he was looking to add votes, he did not succeed in the debate.

A candidate who came in through the window. It barely exceeded 1.5% in the PASO. He had a great chance to be seen. A religious candidate (she is an evangelist), “Provida”, had to bring the discourse of Christian values ​​and take it to the extreme. It did not succeed.

Had some memorable moments. “I am a woman of faith. I believe in God, ”he introduced himself. “We have to get rid of gender ideology. Don’t mess with the boys.” “We were talking about saving lives and at the end of the year the abortion debate was installed and they celebrated it.” “The churches were closed (in a pandemic); the spiritual issue was not a priority ”.

But in many moments her history as a deputy and specialist in international relations won her over and she spoke about the economy, tax policy, agriculture and political agreements. His proposal blurred.

The author is a journalist and political scientist. He participated in the production of more than 20 television debates. Subscribe to their newsletter