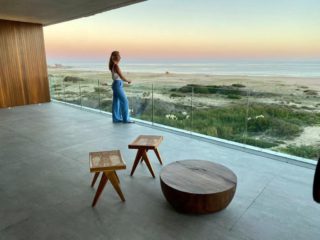 For Ingo Schirrmann, a German television producer, an impromptu vacation in Uruguay for the New Year became a new way of life. In December 2012, he unexpectedly canceled his tickets to go to Courchevel, France, preferring to fly to Punta del Este, on the coast of Uruguay. The beaches of South America sounded more exotic, as well as warm, than the ski slopes of the French Alps.

He went straight to José Ignacio, a peninsula with a chic-bohemian vibe located 30 kilometers from the center of Punta, and he had a blast, so much so that he bought a plot of land near the ocean where he later built a modernist house, designed by him. acclaimed local architect Martín Gómez. Schirrmann, who lived in Hamburg, intended to use the house during the southern hemisphere summer but, as he spent more time in José Ignacio, he fell in love with its calm and friendly atmosphere. The pandemic defined his decision to make that his primary residence.

“Five years ago, if you had told me that I would be living in a small town, I would not have believed it,” he said. “What makes José Ignacio special is the people who come here. It is easy to connect with people from different parts of the world who think the same, and everything is very relaxed ”.

José Ignacio, in effect, is a small town of less than 2.5 square kilometers. It happens that it is also the most cosmopolitan corner of Uruguay. In recent years, this previously little-known fishing enclave has become a magnet for affluent globetrotters who are drawn to the rustic. Like Schirrmann, Europeans and Americans who travel to the Uruguayan coast on vacation end up buying properties there, joining a growing group of South American residents.

There is a famous restaurant on the beach, La Huella, which all its customers love thanks to the seafood that they grill on the embers and the decoration with weathered wood. There are gravel streets adorned with Instagram-worthy boutiques. But most of all, there are long beaches, clear skies, and no reminder of the stresses of modern life. The proximity to Punta del Este, a larger and more urban tourist complex, is both convenient and unimportant.

“The coast of Uruguay is an international meeting point,” said Alejandro Perazzo, a real estate agent affiliated with Sotheby’s International Realty. “For foreign buyers, this country has many benefits compared to the rest of the region. The rules of the game don’t change here, no matter who is in government, and this predictability is appealing. You also feel security ”.

Perazzo compared Uruguay with its neighbors Brazil and Argentina, two countries with a history of political and economic upheaval. For decades, Argentines and Brazilians have vacationed in Punta del Este and José Ignacio. But lately, given Uruguay’s stability and the proclamation of tax benefits for foreign investors, many are staying longer. (Applications for permanent residence in Uruguay by Argentines, for example, tripled last year to nearly 10,000 applications, according to local news media.)

That’s why the real estate market is in full swing, especially when it comes to luxury residences with inspiring views. In José Ignacio and its surroundings, a series of luxury developments (although discreet, so as not to clash) are being built in front of the sea.

16 kilometers from José Ignacio, in a town known as Manantiales, Argentine fashion designer and real estate developer Federico Álvarez Castillo has just presented Colette, a beachfront condo with a minimalist aesthetic made of concrete and glass. In order to harmonize with the pastoral environment (the grass dunes, the pine forests and the stone chalets), Álvarez Castillo designed four low-rise buildings separated by leafy courtyards. There are 42 units, with a starting price of $ 1.3 million for a 150-square-meter three-bedroom overlooking a seemingly endless beach.