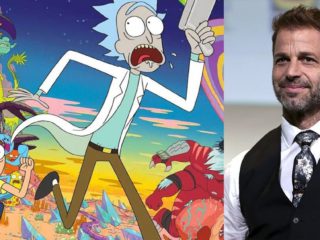 Army of the Dead director Zack Snyder revealed his intentions to participate in a Rick and Morty-related project.

How often Rick will be able to say Morty in an episode? Is Morty tired of his grandfather’s follies? Isn’t anyone going to stop Rick while he takes Morty away from his normal life to take him to travel in space / time? … Those and others are doubts that do not let more than one fan of the most popular animated series of the moment sleep, Rick and morty. Now, there is another question for them. Can you imagine a live-action starring this pair? Because Zack Snyder Yes.

The director not only imagines it, but it is a project that attracts him, which ends up being encouraging for the followers of the show, knowing that a renowned filmmaker would be interested in being part of this idea.

This became known when the writer participated in The Film Junkee Vodka Stream, a program in which he was questioned about various issues, after which he ended up releasing this pearl. When the creative was asked if he would direct a traditional comedy, he included said animation in the conversation, a fact that surprised viewers.

“There’s no (traditional) straight comedy that I can think of, you know, that it’s like a wall-to-wall straight comedy,” he replied. “If I did the Rick and Morty movie, it would probably be the closest thing I would get,” he added.

Although the above statement may seem very general and not very telling, the developer added other words to his statement. In the rest of the comments, Snyder revealed that he had suggested putting a live-action part at the end of an episode of the series and offered to direct it.

“You know what I wanted to do… My suggestion was to record, to do, as one of the final teasers, but in live action,” he admitted.

For his part, one of the creators of the successful production of Adult Swim, Scott Marder, also spoke of the possibility of a live-action.

“I think it will happen, I believe it. It would be overwhelming. I wouldn’t be surprised if one day there were one that fell down the pipe. I feel like every episode is a movie. I’d like to see what a movie would be like, it would feel like the equivalent of a trilogy. We just packed a lot. It would have to be pretty ”, he added.

Currently Rick and Morty is reaching its fifth season, the first episode of which was made available by the production company to watch for free on Youtube.