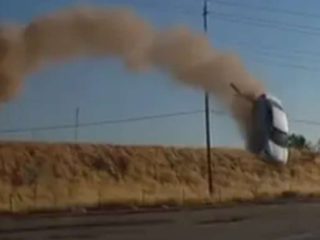 A couple traveling on Highway 99 in Yuba City, California, United States, captured the moment when a smoking car appeared “flying through the air”. The dash cam video was shared on the family YouTube channel The Life of Mike & Fam.

With a huge plume of smoke behind it, the car dives into the asphalt and flips over twice before finally stopping between two lanes. In the video description, the family added: “A terrifying way to start the day, especially for the lady in that car! I prayed for her and I hope everything is fine. “

The couple whose camera captured the scene immediately called 911 and police says the driver was taken to a hospital for treatment. Not only did he survive, he was released from the hospital after sustaining minor injuries.

For their part, the police explained that the vehicle could have been involved in an assault and escape moments before. A witness told the channel CBS13 from Sacramento that the car had sped through his business moments before he could no longer maneuver around a sharp curve. Then, ran off the road, climbed the embankment, and soared through the air.

“I was quite surprised and perplexed how someone escaped such an impact,” he said. “God must have had his hand on that person.”

Brian Conejo, who works at Mechanical and Irrigation Solutions, observed the accident with the company’s surveillance cameras. Told CBS Sacramento: “It’s crazy to see someone fly through the air. Speaking about the moment before the accident, Conejo continued: “On the security cameras we could see the person hitting the cars on the highway, probably at 80-100 miles per hour in a zone of 25, they came very fast directly in front of My shop. Here’s a very hard left turn. They couldn’t make that turn, they just kept going straight and literally flew over the flyover. “

The video was widely covered by local news, and viralized from the YouTube channel of the protagonists, where it already has more than 750,000 visits.