A Greek priest throws two liters of acid on several bishops in a monastery, leaving 10 hospitalized 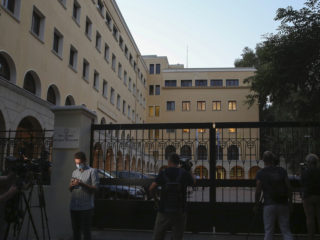 A priest of the Greek Orthodox Church sprinkled with caustic liquid seven bishops during a disciplinary hearing against him held this Wednesday at the Petraki monastery in Athens. The bishops, as well as two lawyers and a policeman who tried to immobilize the attacker, were hospitalized with burns.

Four of the bishops were slightly injured, one had to be transferred to the plastic surgery unit of another hospital, while the condition of two others is more serious. One of them was operated on in an ophthalmology clinic, but it prevented the loss of an eye, the newspaper detailed Ta Nea.

The attack came as the synodal court was announcing its final verdict on the 37-year-old cleric, who had been deposed in the first instance for misconduct in the wake of a drug case.

The congregation was expected to confirm the removal of the priest, when, unexpectedly, the priest took out a two-liter bottle and, without saying anything, began to pour acid on them, said one of the bishops who had attacked the local television. “When I saw him take out the bottle, my first thought was that it was Holy Water“Kallinikos confessed from Arta, who ended up with burns on his face.

The assailant was arrested after the attack. In 2018 he was arrested for possession of 1.8 grams of cocaine, but in this time there have been many complaints from parishioners about his aggressive behavior.