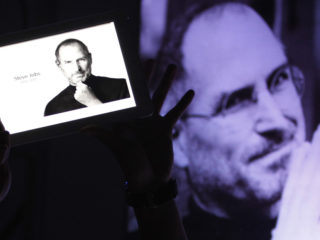 A London entrepreneur is auctioning off a handwritten job application by Steve Jobs in 1973. The form, which the later Apple CEO would have filled out when he was just 18 years old, will be available to interested parties as a physical asset, supposedly authenticated. , or in digital form, as a non-fungible token or NFT, with which the initiative joins other similar ones in competition between the physical and digital world.

The one-page document is believed to be Jobs’ first job application. He does not mention what position or company he was applying for, but it was written a year before he joined video game maker Atari as a technician in 1974. At the time, he still had three years to go before founding the now iconic Apple brand.

He mentions English literature as his specialty and cites Reed College in Portland, Oregon, which he had already dropped out, as his address. His special interests and abilities included “electronic technology” and “design engineering,” while his abilities included experience with computers, calculators, and design technologies.

In the application, Jobs also claimed to have a driver’s license and rated his access to transportation as “possible, but not likely.”

The handwritten document has already been auctioned three times since 2017. Its value increased by 1,200% during that period, proving its appeal.

Auction organizer Olly Joshi, who bought the original for $ 224,750 in another bid in London in March this year, will accept bids for the physical version through his website, which is based on an auction app called Snoofa. The NFT version will be available through Rarible.

This latest auction “aims to highlight the modern shift in perceived value, between physical and digital,” Joshi said in a statement, adding that this could open a whole new market for collectibles, in which both forms coexist.

The simultaneous auction in physical and NFT was launched this July 21 at 9:41 a.m. Pacific time, in honor of the specific time that Jobs used to reveal a new Apple product during launch events. It will close on July 28 at 2:00 p.m., also in Pacific time.

Bids for the digital asset, which is sold in association with the NFT Rarible marketplace, must be made and paid for in ether. The physical form, sold through a partnership with auction software company Snoofa, can be purchased with cash or that cryptocurrency.

An undisclosed percentage of the sale will be donated to the Cancer Research Institute and One Laptop Per Child charity projects.