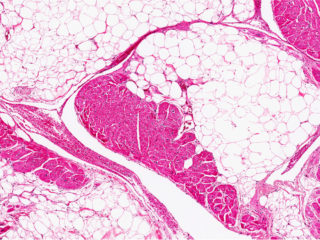 An experiment with obese laboratory mice, treated with thymic stromal lymphopoietin, led to a significant loss of visceral fat, the most damaging to health, and a weight loss of more than 40% in just four weeks, without dieting nor increased exercises, according to a release from the Perelman School of Medicine of the University of Pennsylvania (USA).

Thymic stromal lymphopoietin, also known by its acronym TSLP, is a protein of the cytokine family that is part of the immune system and is involved in some allergic diseases.

With the idea of ​​studying how this cytokine affects insulin resistance and whether it could be a target for treating type 2 diabetes, a joint team from the universities of Pennsylvania and Washington accidentally discovered that TSLP induces weight loss, and it does it in an unusual way: making obese animals ‘sweat’ fat, according to the study published in the journal Science.

After 28 days, it turned out that TSLP reversed obesity in the rodents subjected to the experiment, while the control group continued to gain weight. During that time, those who received cytokines lowered their initial weight from 45 grams to a healthy 25 grams, although they ate between 20 and 30% more. The activity level of all of them was the same.

The most important thing is that the first group lost visceral fat, the most dangerous because it accumulates in the abdominal cavity, around the main organs. These mice also showed an increase in blood glucose and insulin levels.

Unexpectedly, fat loss was not associated with lower food intake or faster metabolism. Instead, the researchers found that TSLP stimulated the immune system to release lipids through the sebaceous glands, which produce oily sweat on the skin.

“When I looked at the coats of the TSLP-treated mice, I noticed that they glowed in the light. I always knew exactly which mice had been treated, because they were so much brighter than the others,” observed lead researcher Taku Kambayashi, initially looking for a explanation for weight loss.

To test the theory, the researchers shaved the TSLP-treated mice and then extracted the oils from their fur. They found that Kambayashi’s hypothesis was correct: the shiny coat contained lipids specific to sebum.

This confirmed that the release of oils through the skin was responsible for the loss of fat, induced by TSLP.

“This was a completely unforeseen discovery, but we have shown that fat loss can be achieved by secreting calories through the skin, in the form of sebum rich in energy, “noted Kambayashi.

The researchers found a link between TSLP activity and the sebaceous glands of healthy human skin. Researchers believe that selective fat loss can be achieved in humans, although the implementation of such methods is not easy.

“I don’t think we naturally control our weight by regulating sebum production, but we may be able to speed up the process and increase that production to induce fat loss. This could pave the way for new therapeutic strategies to reverse obesity. and lipid disorders, “concluded Kambayashi.