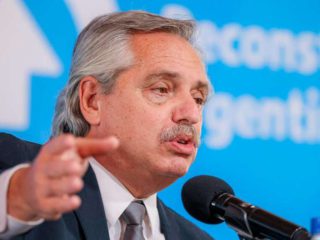 President Alberto Fernandez questioned this Thursday the policy of the government of Mauricio Macri on the Malvinas Islands and affirmed that during the four years of the PRO’s management there were “some laxity”In the claim of Argentina for the recovery of the sovereignty of the southern archipelago.

He said it at the head of the act to commemorate the Day of Affirmation of Argentine Rights over the Malvinas, South Atlantic islands and the Antarctic sector.

// Coronavirus in Argentina: 669 deaths and 27628 new infections were reported in 24 hours

“Unfortunately in the 4 years that preceded us, Argentina had a different attitude, a certain laxity that allowed many efforts that we had made in order to guarantee rights in the land of the Malvinas are somehow overshadowed“, Held.

And he added: “But when we arrived I said that there was no more place in the 21st century for colonialism.”

What the president said

For the president, “every day we must work to try to recover that territory”.

In his speech, Alberto Fernández said that “sovereignty is something that exceeds the idea of ​​territorial integrity“And specified that” to be sovereign is to develop science, technology and intelligence. From that logic, we are convinced that, without education, without science and technology, Argentina delays its future ”.

“We have a duty to know what we have in the South Atlantic. We have already made a lot of progress with the new redefinition of our territorial sea, but not all that is necessary. We need to know what wealth Malvinas is home to, the surrounding sea and how to advance in the Antarctic integration to the Argentine territory ”, he indicated.

And he affirmed: “We are recovering the collective memory to preserve rights. We must not give up in our claim, in our convictions. We have to learn that diplomacy should lead us to recover that land and that we should not risk more Argentine lives in search of a solution ”.

“But we must put all the effort and courage in claiming in multilateral organizations. The Malvinas are were, are and will be Argentine ”, he emphasized.

In this framework, the event announced the creation of research networks, promoted by the Foreign Ministry and the Ministry of Science, Technology and Innovation, to analyze the national sovereignty agency through the social sciences, the economy, and natural resources. , the environment and international and legal relations.

The president was accompanied, among others, by the Minister of Science, Technology and Innovation, Roberto Salvarezza, and the Secretary for Malvinas, Antarctica and the South Atlantic of the Foreign Ministry, Daniel Filmus.

“We have demanded time and again and back in 1965 the UN decided that Argentina and the United Kingdom would sit down and seek a solution to the undue usurpation of the Malvinas. Argentina made many efforts to find a point of dialogue and agreements with the usurpers, but it did not go well for us, “said the president.

And he affirmed: “Unfortunately in 1982 a dictatorship had the ‘better’ idea of ​​initiating a war action that ended with the result that ended and that hurts us all and that in no way tarnishes the heroic deed of those who were there”.