Antibodies persist 12 months later and increase with the vaccine 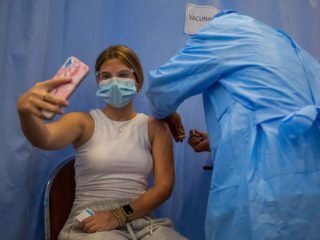 Science Writing, Jun 14 (EFE) .- The antibodies that are generated in response to the SARS-CoV-2 infection last between six and twelve months after infection, protect against the different variants that circulate and are even boosted with vaccines.

This has been verified by an international team of scientists led by the American Michel Nussenzweig, head of the Molecular Immunology Laboratory at Rockefeller University and investigator at the Howard Hughes Medical Institute, and the results are published today in the journal “Nature”.

Researchers have found that antibodies continue to evolve over a period of 6 to 12 months and that they are enhanced when the person who suffered the infection receives the vaccine, which is why they have concluded that immunity against COVID-19 could be long-lasting.

Michel Nussenzweig and his colleagues analyzed, to reach these conclusions, blood samples from 63 people who had recovered from COVID-19 in the previous year.

Of these, 26 had already received at least one dose of Moderna or Pfizer-BioNTech vaccines, and found that between 6 and 12 months later the range of antibodies produced had increased both in scope and potency.

Later, when the individuals were vaccinated, they began to produce “highly effective” antibodies against the different variants of SARS-CoV-2 that are already circulating.

One year after infection, neutralizing activity against all forms of the virus included in this study was lower among people who had not been vaccinated than in those who had.

This, according to research results, suggests that vaccination increases immunity in those who have already suffered from the disease.

The researchers have further pointed out that if cells evolve in a similar way in vaccinated people who have not had the disease, a properly timed “booster” vaccine might also be able to generate protective immunity against variants of the virus. circulating around the world.