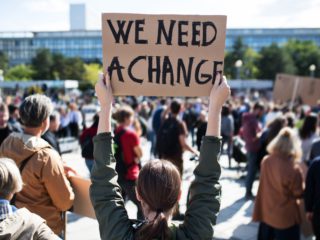 In the Bundestag, speakers from the government factions and the opposition clashed rhetorically on Thursday in the dispute over climate policy. Green parliamentary group leader Anton Hofreiter described climate neutrality as the most important project of our time, which is vital in the truest sense of the word. The grand coalition has not only “lost an incredible amount of time” here, but is also stirring up resentment for a tabloid headline and is therefore acting irresponsibly.

Stumbling block: Federal Finance Minister and SPD candidate for Chancellor Olaf Scholz recently warned of a “fuel price screw” after the Greens’ candidate for Chancellor Annalena Baerbock had advocated increasing the cost of gasoline and diesel by a total of 16 cents. Federal Transport Minister Andreas Scheuer (CSU) supported Scholz. In doing so, according to Hofreiter, the grand coalition is trying to undermine the social majorities that currently exist for the necessary measures in the fight against climate change.

A “very grand coalition of hypocrisy”, the Greens Sylvia Kotting-Uhl sensed in the latest statements from the government camp: Baerbock’s price approach was realistic. For Hofreiter there is no question that “the gigantic task” cannot be achieved with poetry album slogans and abbreviations. An adequate CO is needed2– Pricing and an offensive funding policy. “We have to expand trains, buses and bicycles and get out of the combustion engine as quickly as possible,” emphasized Hofreiter. “We can’t make a wish-list,” which is exactly what you need in terms of election strategy. It is urgently necessary to act with all instruments.

The employees in the auto industry were concerned about jobs, people in the country about their mobility, Hofreiter acknowledged. The Greens therefore wanted to set up a fund for those particularly affected. With climate grants, low-wage earners would have to be supported in purchasing electric cars or heat pumps. Landlords should also pay the full CO2-Consumption of heating costs.

More CO2 save on

The reason for the debate was the 1st reading of the Federal Government’s draft on the reform of the Climate Protection Act. It stipulates that Germany will generate significantly more CO in the coming years2 and save other climate-damaging gases than initially planned. The Federal Republic must therefore become climate neutral by 2045. So far, greenhouse gas emissions should decrease to net zero by 2050. According to the draft, the interim target for 2030 will be increased from the current 55 to 65 percent greenhouse gas reduction compared to 1990.

The project, which could go further, was forced by the Federal Constitutional Court, complained Hofreiter. The coalition failed to deliver the necessary and sufficient measures for the higher goals. The CDU / CSU continued to block the expansion of renewable energies and reasonable social compensation. This failure had long been priced in by the public.

Black and red have “shut their eyes for far too long,” complained left parliamentary group leader Dietmar Bartsch. Now climate policy is becoming a snap shot. Without the many young people who had taken to the streets and the Karlsruhe judges, the coalition would not have gone any further. Now it is absurd to “turn the price screw in particular” and at the same time little for the railways as well as the longevity and regional production of products: “You change almost nothing in the structures.”

This is a policy “at the expense of commuters, families and normal people,” said Bartsch to the government. Since the beginning of the year, people have been paying “a hefty surcharge for fuel and heating”. Thanks to Federal Minister of Economics Peter Altmaier (CDU), Germany is “European champion in electricity prices”. So climate protection becomes a “rip-off”.

The planned amendment shows no path, “how we protect the freedom of the coming generations”, criticized Lukas Köhler (FDP). It only contains annual goals that appear to have been rolled. That smells like a planned economy. In addition, there is no integrated European strategy. In addition, there is a misleading label, as in the transport sector, for example, a minus of 65 percent would already have been necessary with the old specification. The coalition also conceals that negative emissions are needed and have “achieved nothing”.

The government only tampered with the symptoms, ranted Rainer Kraft (AfD). The coalition accepts the deforestation of forests and the industrialization of land. This is a violation of the sustainability goals. In addition there would be “socialist hammer methods”, the citizens would get “taxes and levies overburdened”.

The Federal Constitutional Court wants more climate protection and more intergenerational justice as well as a “large majority in society”, underlined Federal Environment Minister Svenja Schulze (SPD). “We are very happy to implement this judgment.” The “social balance will be organized”. So it is only fair that the CO2– Surcharge for heating to be divided at least halfway between landlords and tenants. So there is an incentive to “finally throw out the old oil heating system”.

“We want moderate pricing” from CO2 and lower the price of electricity “, explained Anja Weisgerber (CSU):” We make politics with a sense of proportion. “The coalition also looks at the effects on the economy and counts on people’s acceptance:” We want enthusiasm, not asceticism. “It is important For example, relying on hydrogen to promote decarbonization in industry is also necessary “to get the developing and emerging countries” to build their economies in a climate-neutral way.