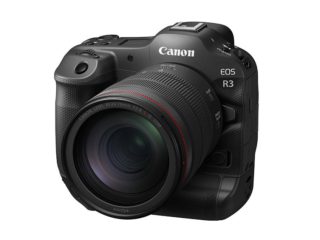 Already announced in spring, Canon is now presenting the EOS R3 in its entirety. The beefy housing shows that the mirrorless system camera is a professional model. Above all, it wants to convince press, sports and wildlife photographers and thus competes with the Sony A9 II, which is also in the ring as a mirrorless professional camera. But the EOS R3 also wants to take the last reflex hurdle and replace the Canon EOS 1DX Mark III.

In order to convince skeptics, Canon put together a comprehensive package with the EOS R3, which, according to the manufacturer, contains more than 100 improvements and innovations. The most prominent are likely to be Canon’s newly developed 24-megapixel BSI (Back-Side-Illuminated) sensor and the long-awaited eye control.

When you see the Canon EOS R3, you automatically think of its mirrored sister, the EOS-1D X Mark III. The battery handle integrated in the housing makes the camera look massive. However, it is slightly smaller and lighter than the 1D X Mark III (1015 grams with SD card and battery).

The new heart of the Canon EOS R3, the 24-megapixel BSI sensor, has been optimized for high speeds, according to the manufacturer. The purely electronic exposure should work without a visible rolling shutter effect and with anti-flicker. With tracked autofocus (AF-C), the camera delivers up to 30 images per second in raw. With short exposure times of at least 1 / 64,000 second, photographers should be able to freeze even fast movements such as golf without any problems.

The housing of the EOS R3 is made of a magnesium alloy, and cooling fins have been integrated directly. It should be dust and splash-proof, but has one limitation in this regard: This is only completely the case if the camera’s own cover for the hot shoe is in place. If you want to use a flash and are dependent on weather protection, you also need the new flash attachment for Canon’s own flashes with rubber lips.

Viewfinder with no visible blackouts

According to Canon, the housing of the R3 was equipped with a rotatable and swiveling touch display at the customer’s request. A movable display is controversial in professional circles because, especially in the sports and wildlife sector, cameras often come into contact with dirt and moisture or have to withstand knocks and bumps. Movable displays could quickly suffer damage.

Like most cameras, the buttons on the EOS R3 can be freely adapted to the needs of the photographer and the shooting situation. The settings should also be able to be saved on an SD card and can be loaded accordingly.

The EOS R3 is also said to have significantly increased its auto focus compared to its mirrorless EOS-R family members. Canon specifies a focus time of 0.03 seconds. The shutter release delay should be set to 50 milliseconds by default, but it can be reduced to 20 milliseconds. In addition, the AF should still work reliably at up to -7.5 EV.

The autofocus system of the EOS R3 has also been expanded to include the revived eye control function, which some photographers are familiar with from analog times. The manufacturer claims to have adopted the technology for this from its medical division. Eye-Control should primarily work together with the continuous autofocus for subject tracking and be coupled with deep learning functions. For example, in sports races, it is possible to quickly switch between different motifs such as runners or vehicles. The previously known options for setting or moving the focus point – for example using a joystick or the touchscreen – are retained in parallel. The point at which the photographer is looking is visible with a circle in the viewfinder. However, the autofocus only selects the point if the user expressly confirms this. Different buttons on the housing can be assigned accordingly.

Eye control is individually adapted to the respective user. An internal program helps to calibrate the sensors in the viewfinder. Settings for several users or a single user with and without glasses or in different light situations can be stored in several memory locations. The more often it is calibrated for the respective situation, the more reliable eye control should work. We were able to try this out on a pre-production model at a press conference. It worked pretty well. The algorithm gets problems with varifocals or fogged glasses.

It sounded surprising, but the EOS R3 should normally only work with an electronic shutter. However, the mechanical lock is available and can also be used.

For this purpose, the algorithms for subject tracking have been expanded. Car and motorcycle tracking, with the option to switch between driver and vehicle, have been integrated specifically for motorsport, according to the manufacturer. To this end, Canon wants to have equipped the camera with optimized recognition of human bodies during sporting movements such as rhythmic gymnastics.

Like the EOS 1D X Mark III, the Canon EOS R3 comes with two storage slots. One is suitable for SD cards, the other for CF-Express. Photos and videos can be saved in parallel on two cards or in different formats on one card each.

Professionals can transfer their data via integrated WLAN (5 GHz), Bluetooth (5.0) or wired. According to Canon, photos and videos can for the first time be transferred to the smartphone via an app and to preset FTP servers via WLAN. The network settings can also be used on the EOS R5 or the EOS 1D X Mark III via SD card transfer.

The EOS R3 uses the same batteries as the EOS 1D X Mark III. The LP-E 19 can be charged in the camera via USB. Operation on the power cable is also possible as an option.

The camera offers videos in 4k DCI and UHD up to 120p for slow motion. 6k videos with 60p raw are also possible. The recording time is up to six hours. If particularly high frame rates (100p / 120p) are involved, the duration is reduced to 1.5 hours. In order to reduce the file size and speed up the video workflow, the EOS R3 CRM light or MP4 material should be able to record in All-I, IPB or the smaller IPB Light option. An internal 10-bit recording should be possible for a high dynamic range.

The accessory / hot shoe on the camera has been equipped with new contacts that allow additional accessories. In addition to the flash unit, Canon itself also offers a DM-E1D directional stereo microphone, but also allows third-party manufacturers to supply equipment. For example, Tascam already offers an XLR adapter CA-XLR2d-C for two-channel recordings with professional XLR microphones.

The Canon EOS R3 should be available from November 2021 and then cost 6,000 euros. Canon wants to present the camera to the public for the first time at the Photopia in Hamburg.