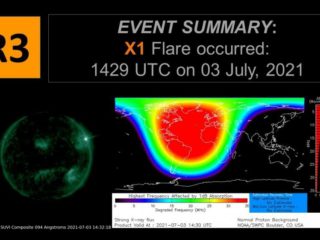 If you wondered about an hour-long failure of the GPS in your sat nav or smartphone on Saturday afternoon: Responsible for this is a comparatively strong solar flare on the northwestern edge of the sun, in the newly created region 2838. The outbreak, a so-called flare with strength X. 1.5 started at 4:18 p.m., peaked at 4:29 p.m. and ended at 4:34 p.m. local daylight saving time. A smaller M 2.7 flare had already preceded the outbreak at 9:17 a.m.

The radiation emanating from the so-called flare caused a radio blackout on earth. Because both the reception of GPS devices and radio transmitters were impaired for hours, NASA experts classified it as radio event R3 – there are five classes in total, which range up to several hours of failure of radio and navigation services.

Strong breakout, but nothing special

On the rating scale, the flare ranked in the highest category X, which in turn is subdivided into values ​​from 1 to 10 for each doubling of the intensity. After that, the outbreak reached magnitude X 1.5.

This is the first comparatively strong outbreak in the new sunspot cycle 25, but X-class flares are actually not that rare and happen on average once a month, but most recently in September 2017. In the approximately eleven and a half year cycle of sunspot activity, we are now in one again Phase of sunspot increase and thus more flares and coronal mass ejections on the solar surface are connected.

Flares only last a few minutes, but the amounts of energy usually radiated by the sun in the form of X-rays and hard UV radiation are far exceeded. With a flare, the sun dissolves magnetic field structures in active regions, as happened in the aforementioned region 2838. The day before, there was a smaller flare of class M 2.7 at the same point. Flares directly emit electromagnetic radiation that propagates in space at the speed of light. It reaches the upper layers of the earth’s ionosphere in around 8.3 minutes. The radiation increases the ionization and temperature in the upper atmosphere, which leads to its expansion. Low-flying satellites are therefore slowed down more strongly by air molecules.

A coronal mass ejection of plasma can also be associated with a flare – even if both forms exist independently of one another. The X-flare from Saturday was also followed by a plasma cloud at a speed of 375 km / s. The plasma cloud (“solar wind”) therefore travels much more slowly and only reaches the earth’s magnetosphere after hours or days. Unlike flares, the particles primarily affect the magnetic field and cause geomagnetic storms, for example. CMEs also influence radio wave propagation, especially on shortwave. The impacting particles have a visible effect, for example through northern lights in the skies of polar regions.

On earth, the hard radiation emitted by the flare is not a problem for humans because it does not penetrate to the ground. It looks different for astronauts and pilots. The impact of CMEs on the earth may seem much more massive to many people, but the long warning time makes it easier to prepare for them.