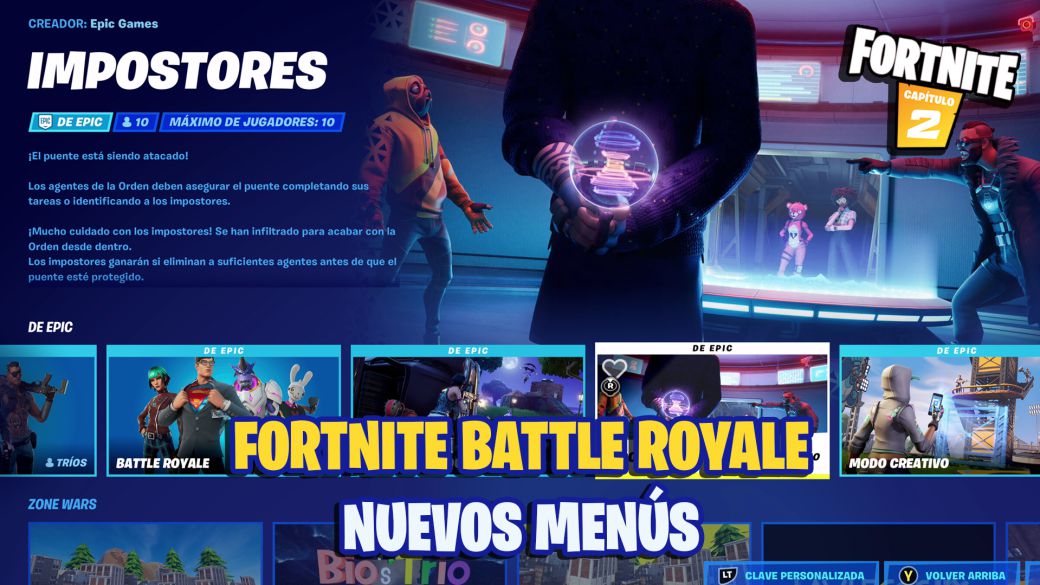 Fortnite renews its interface; so are their new menus

The patch 17.50 from Fortnite, launched on Tuesday, August 31, 2021, has brought with it many changes. One of them is a new menu system; a revamped interface for him game mode selection menu from Fortnite Battle Royale. We tell you how is this novelty of the Season 7 of the Battle Pass from Fortnite Chapter 2:

Fortnite Season 7: this is how the new menus are

Through a publication on the official Fortnite blog, Epic Games has taken the opportunity to tell us about the news and virtues of this renewed system. The new mode selection menu is indeed much larger than the old one., and add new categories such as Zone Wars, Role Playing, Closed Space or Classes that encompass many Creative Mode maps and give them visibility they might not otherwise have.

Of course, standard game modes are still visible, in the From Epic category, which includes all the official Fortnite Battle Royale modes and playlists, such as Solo, Duos, Trios, Squads, Team Fight or Impostores.

These new menus do not eliminate the options that we had available with the previous menu. We can continue to play private games if we have a creator code, and the rest of the options related to Creative Mode are still active. We can play other players’ creative islands or create our own without any kind of restriction; everything is exactly the same as before in this respect.

In short: it is a full-fledged facelift to the menu system. Like everything, it will surely cost us to get used to it, although the fact that the menu is so large gives rise to minority game modes or those that would not have any kind of visibility now can be enjoyed by a greater number of players.