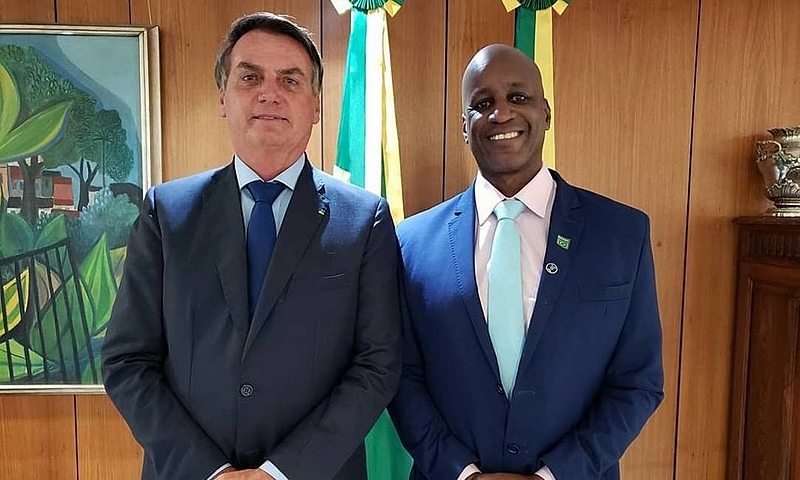 How Bolsonaro dynamites the institutions: the case of the founding of black Brazil

Brazilian journalist Sérgio Camargo, who presents himself as a “black right-wing anti-victimist and enemy of political correctness,” considers that anti-racist activists are a bunch of whining complainers, leftists to attack with viciousness. It would be a pure anecdote if I did not preside over a public institution commissioned by President Jair Bolsonaro. And not just any. Camargo directs the Palmares Cultural Foundation, whose mission is precisely to promote and preserve the cultural, historical, social and economic contribution of black citizens to Brazilian society. The 56-year-old journalist enjoys provoking with statements such as “Black lives matter is the slogan of racist and hypocritical blacks!” It is, above all, the most grotesque exponent of the Bolsonarist strategy to blow up the institutions that have no place in his idea of ​​Brazil. Behind the apparent chaos, there is a plan.

Since coming to power almost three years ago, Bolsonaro and his government have carried out a political method to weaken the institutional framework in the field of culture, the environment or the indigenous people. The case of the Palmares Foundation draws attention to the peculiar figure of Camargo, the bombs that he drops every day, also in the form of a tweet, and his frontal attacks on the defenders of the rights of blacks at a time when systemic racism has fully entered the political debate in the United States and some European countries. Also in Brazil, built for 350 years by enslaved Africans and where blacks and mestizos are not a minority, but 54% of the population.

The lawyer Sheila de Carvalho, from the Black Coalition for Rights, maintains that Camargo “has very little legitimacy to preside over the foundation.” He adds that he was placed there with a mission: “Sérgio Camargo is part of the Bolsonarista project that is focused on making invisible and exterminating vulnerable groups, including the black population,” he said in a telephone interview.

This Thursday the former journalist announced that Instagram had deactivated his account “for telling truths about Africa and the uselessness of the black movement.” His Twitter account is a series of inflammatory claims. A pearl of this week: “Negroes, the left wants to enslave you, because for them we are a sub-race, people incapable of anything, except serving them.”

The Palmares Foundation was born in 1988, like many other institutions, under the protection of the Constitution approved to consolidate the new democratic Brazil after two decades of dictatorship. She was always one of the poor sisters of the Ministry of Culture. In the last decade its budget fell by 75%, according to information obtained by black soul, a digital focused on black Brazilians.

But Bolsonaro’s arrival in power has brought the Trojan horse through the front door. A few months ago he tried to purge the list of illustrious personalities: he eliminated the multi-award-winning singer Gilberto Gil, who was Minister of Culture with Lula da Silva, or Marina Silva, the candidate who tried to reach the presidency with an environmental agenda, among others. And it incorporated the military policeman Vitor Farias, who died in the act of service.

He also commissioned an audit of the nearly 10,000 volumes in the library. The conclusion, as Camargo explained, was that more than half were not related to black themes and were works related to the sexual revolution, the idolatry of criminals, Marxist revolutions, guerrilla techniques, and so on. The sieve affected Marx, Lenin, Max Weber … His attempt to purge the library and purge the list of illustrious people was stopped in the courts.

The activist explains that the Black Coalition for Rights, which groups together 200 organizations, keeps a watchful eye to go to court or activate deputies and senators. Another of the Palmares Foundation’s competencies is to recognize the quilombos, urban settlements created by slaves after the abolition. This government has not legalized any of them, nor has it legalized natural reserves or indigenous lands.

The activist De Carvalho accuses the Government of having a racist agenda. “Who dies of hunger in Brazil, who dies more from covid, who dies more from police violence?” The statistics clearly say that black Brazilians. The inequality that tears Brazil apart began to germinate during slavery, which was only abolished at the end of the 19th century. But the president of the foundation maintains that some good things brought: “Slavery was terrible, but beneficial for the descendants. Blacks in Brazil live better than blacks in Africa, ”he wrote before being officially appointed to the cargo. His speech has not tempered one iota since he presides over the institution. Like Bolsonaro, Salvini or Trump, he equates the left with totalitarian communism and considers political correctness a castrating corset.

The Brazilian black movement trusts that, beyond his words, when he leaves there will be something left from which to start the reconstruction.