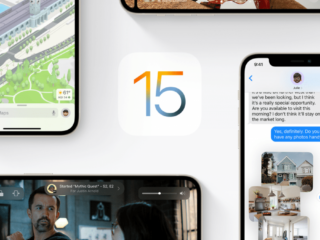 iOS 15 will allow significantly more dragging and dropping in the future: The functionality will be implemented system-wide in the future. This is what testers of the current developer beta have found. If it is currently only possible to mark photos or text passages within an app and then move them with a gesture, the iPhone with iOS 15 can now do this beyond applications.

Long press and then pull

Apple itself shares this in its own Preview description of iOS 15 With. “With support for drag and drop across apps, you can take pictures, documents and files from one app and drag them to another.” The Implementation of the drag and drop function is done by long pressing on the desired object, which becomes larger as a result – text can be selected beforehand.

Without lifting your finger, you then use a second finger to swipe out of the app and open another. The object can then be placed in this. Visual cues are given as to what a possible drag target could be. It is also possible to select multiple objects before copying – but this does not seem to work in every app.

Spotlight can do it too – and more

Also practical: the icons that appear in the Spotlight search (as well as in Siri recommendations) can be accessed via drag & drop. So you can drag an app found via Spotlight onto the home screen and move it around – this avoids annoying moving back and forth between home screens. In addition, it is now possible for the first time to trigger a quick action menu with a long press on a found icon – and thus delete the app directly. This also makes organizing the home screen and app a lot easier. One wonders why Apple is only now implementing this; after all, this is the logical way of working, as the quick action menu also appears on the home screen.

Users of the App Store have also discovered that in the search there Screenshots only show up if the app has not yet been installed has been. This makes the search function significantly clearer – and also more logical, because hardly any screenshots of already installed apps are required.