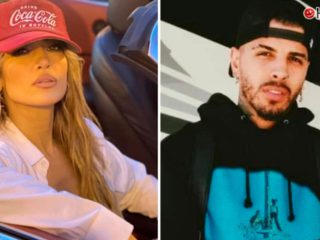 This year is loaded with a lot of music and collaborations, especially for Rauw Alejandro, who is preparing new music with Jennifer Lopez. On June 9, J.Lo and the Puerto Rican artist were seen recording together what appeared to be a video clip in Miami Beach. This was filmed in the most emblematic places of the area, but the theme of the music video or any important detail is still unknown.

On the other hand, the title of the song that both artists were recording is also unknown, but it has been possible to find out that the filming permission was granted under the name ‘Avanza’. The versatile actress in said filming was stunning and full of energy, and that the recording lasted around 9 hours, as reported by the PR company DeepSleep Studio.

Of course, the international superstar could not find a better way to say goodbye to Miami, the city that has been his usual residence at this time. Now, it has great jobs and projects to carry out, for example its production company Nuyorican Productions will produce films and documentaries for Netflix thanks to an agreement between the entity and the platform of streaming.

In addition, also shortly we will be able to see Jennifer Lopez again on the big screen. The artist will star in a new thriller directed by Niki Caro called ‘The Mother’, and also the film ‘The Cypher’, where she will adapt the novel by Isabella Maldonado.

As for the video clip, according to a photo distributed by the Miami Beach police department, we can get an idea of ​​in which areas she and Rauw Alejandro have filmed the music video. In the photo appears this dressed in shorts and an unbuttoned white shirt leaning on the shoulders of two officers.

The photograph was taken on Española Way, one of the most touristy streets in Miami. In this picturesque street, other artists have also filmed music videos; like ‘Hey Mama’ by Pitbull, J Balvin and Camila Cabella. For now, we can only wait to hear and see the work that both stars are doing.