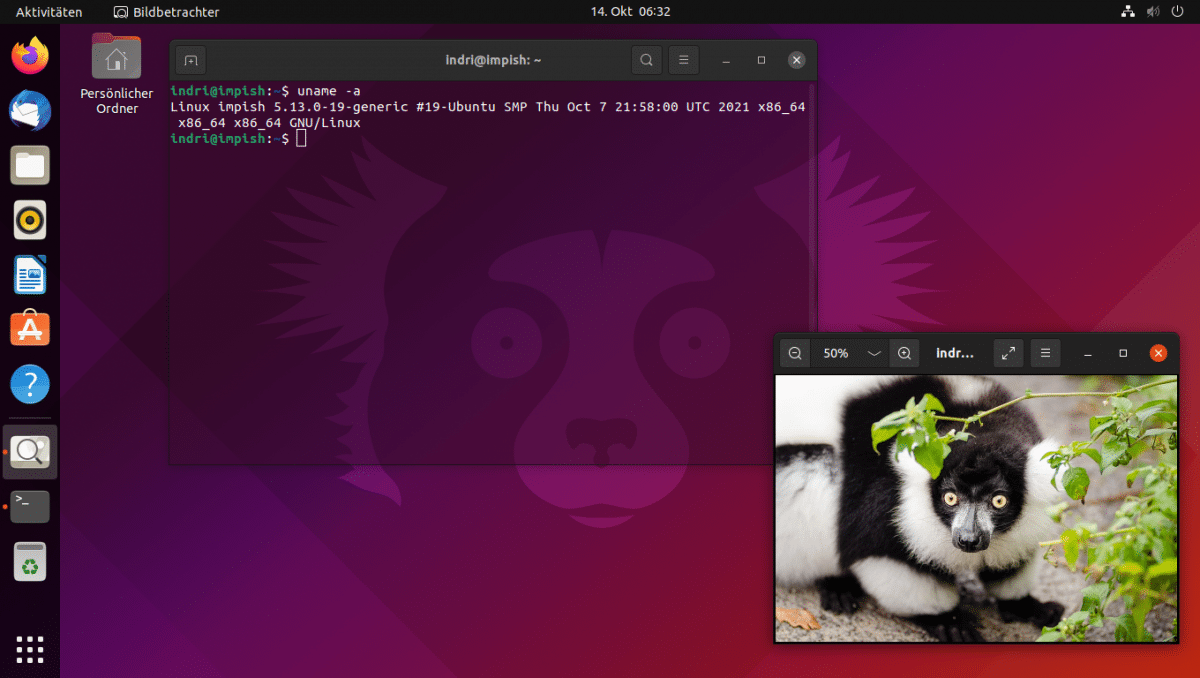 Linux distribution Ubuntu 21.10 with Gnome 40 and Firefox as snap package

Ubuntu 10/21 “Impish Indri” is generally available as of Thursday, Thursday. The new edition of the popular Linux distribution provides the Linux kernel 5.13 to support the next Intel and AMD CPUs, raises LibreOffice to version 7.2.1 and presents Gnome 40 with the ported, Ubuntu-typical extensions in the main edition. For LUKS2-encrypted installations, the Ubiquity installer now offers to create and save a recovery key during installation. A notable but controversial change is the packaging of the Firefox browser, which is preinstalled in all official Ubuntu variants: Firefox is now available as a snap package in the main Gnome edition.

Ubuntu 21.10 follows the solid, semi-annual release cycle of the distribution. It is the last edition with nine months of support until the next Ubuntu version with long-term support in April next year. As in the previous editions, Ubuntu 21.10 delivers the last major changes before the consolidation of the features for the upcoming LTS version begins. Ubuntu 22.04 LTS is planned for April 2022.

Firefox: Mozilla takes care of it

While Firefox is still available as a DEB package in the official Ubuntu editions with alternative desktops, the browser in the main edition of version 21.10 with Gnome is now available as a snap package. This change is controversial because of the slower start times of programs from Snap containers and their size. This is due to the fact that your own packaged libraries have to be installed independently of the system.

Snap instead of DEB package

Firefox is preinstalled as a snap package in Ubuntu 21.10. This change is currently causing problems with the Gnome component for installing Gnome extensions.

The change in the packaging from Firefox to the distribution’s own Snap package format is not the first time Canonical has made one of the key applications on the Linux desktop available in this way: Ubuntu 19.10 made the Chromium browser a snap and deleted the DEB package from the package sources. The reason is the less effort required to maintain these programs, which only need to be built as a universal snap package for different Ubuntu versions.

In the case of Firefox, the Ubuntu development team states that this snap package is now directly maintained by the Mozilla Foundation and the switch to Snap took place after close consultation between the developers. New Firefox versions can get on Ubuntu systems faster, especially since Snap packages are updated automatically in the background. Even when updating an existing Ubuntu, Firefox is installed as a snap and the existing profile directory is copied to the folder when the browser is started for the first time ~/snap/firefox/common/.mozilla/firefox.

For the time being, Firefox will also remain available as a DEB package in the Ubuntu package sources. The departure from the DEB package should only take place in Ubuntu 22.04. Until then, some problems with Firefox are still waiting for solutions. For example, the Gnome Shell integration via the browser add-on in Firefox does not work to access from extensions.gnome.org Install extensions.

Ubuntu 21.10 is the first edition with Gnome 40. Although this version of the desktop environment was released in March 2021, it was not yet suitable for Ubuntu due to incompatibilities of the “Ubuntu Dock” extension, which is the typical toolbar on the left edge of the screen. Only now have the extensions been ported to the new Gnome version and the “Yaru” desktop theme used. In contrast to a regular Gnome 40, the overview page “Activities” does not have its own dock horizontally at the bottom. For the Gnome applications, Ubuntu relies on a mix of applications from Gnome 40 and 41.

As in Ubuntu 21.04, Ubuntu desktop uses Wayland mode by default, while Xorg mode remains as an option on the login screen. On notebooks with suitable touchpads, Gnome 40 under Wayland offers new multi-touch gestures to switch between running programs and virtual desktops. As the release notes indicate, Nvidia graphics cards with the proprietary driver should now also work with Wayland. At least those graphics chips that use driver version 470.x, which eliminate problems with the “Xwayland” compatibility layer.

Ubuntu stays with the Pulse Audio sound server, which is version 15. This version makes you sit up and take notice with improvements in the connection of Bluetooth headsets: The AptX codec delivers better sound quality with supported devices with a fixed bit rate of 325 kBit / s at a sampling rate of 44.1 KHz and lower latencies than the previously used SBC codec . For Sony headphones with Bluetooth, Pulse Audio 15 can offer the LDAC codec, which offers bit rates of up to 1 MB / s. The codecs used can be configured using the pulse audio application “pavucontrol”, which can be installed using the package of the same name. The new sound server Pipewire, together with its pulse audio replacement “pipewire-pulse”, is also available for optional installation in the package sources, but has to be set up manually.

Overview: All issues and downloads

As usual, Ubuntu is also available in official editions with desktops other than Gnome: Seven Ubuntu variants provide XFCE (Xubuntu), LXQT (Lubuntu), KDE Plasma (Kubuntu), Mate (Ubuntu MATE), Budgie (Ubuntu Budgie) and UKUI (Ubuntu Kylin). There are small differences in the installer, because while the outputs with Gnome, Mate, Budgie and XFCE rely on Ubuntu’s own installation program Ubiquity, Kubuntu, Lubuntu and Kylin use the Calamares installer, which is mainly known from Manjaro.

Ubuntu’s server edition has been using the new Subiquity installer in text mode since edition 20.04. A separate (iX) message, which we will link later at this point, deals with the innovations of the server version Ubuntu 21.10, which include PHP 8.0.8 and OpenLDAP 2.5.6, which are not entirely compatible with previous versions.

The comprehensive release notes with a meticulous list of all changes are available on Canonical’s Discourse website, with a small errata of subsequently found bugs and their fixes. The shorter release notes of the Ubuntu variants can be found on their respective websites.