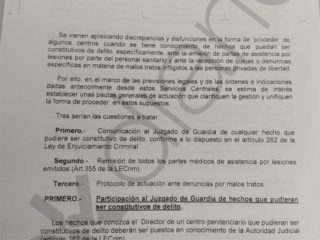 A few days ago a prisoner tried to gouge out his eyes to a correctional officer. Days before, two other violent prisoners tried to kidnap and stab to another worker. Last weekend, a 19-year-old boy deprived of liberty resisted leaving the dining room after lunch, reacted violently, was sent to solitary confinement and when he left he attacked an official biting his arm. The worker wore a fleece jacket, but the inmate pierced through the fabric and dug his teeth into the worker’s skin.

And so, listing attacks that occurred only during 2021 could end this article because more than thirty serious events have been recorded in the first three months of the year. And what has the Minister of the Interior decided to do Fernando Grande-Marlaska through the General Secretariat of Penitentiary Institutions? Draft a circular dated this month making it very clear to the directors of all the prisons in this country that between what an official and a prisoner who denounces mistreatment says, the presumption of truthfulness will always prevail over the inmate, or whatever it is. the same, an official will be presumed guilty of mistreating him until proven otherwise.

«The Central Services have been appreciating discrepancies and dysfunctions in the way of proceeding of the centers when there is knowledge of facts that may constitute a crime, specifically, before the issuance of assistance reports for injuries by health personnel and upon receipt of specific complaints or denunciations regarding mistreatment inflicted on persons deprived of liberty ”. Thus begins one of the circulars distributed in all Spanish prisons for a few hours. According to the document to which OKDIARIO has had access, it does not matter the center, the circumstances of the inmate, his previous conduct in prison or that there was even no no proof that supports the accusation of mistreatment of a prisoner against the workers.

Yes, as such, regardless of the fact that there is no evidence of the alleged abuse, this fact must be immediately brought to the attention of the corresponding duty court. «It is necessary that the mandatory part of injuries be completed in all cases attended by health personnel, even in the absence of objectifiable lesions especially when the inmate claims to have been abused. In this case, the report must include what the injured party refers to and the negative result of the examination, “explains the document in the possession of this newspaper.

The role supports everything, but in the real world this implies depriving the directors of the prisons of initiative and authority, who are the ones who know the daily life of the prisoners and their precedents during their stay in prison.

It also affects the health services, whose knowledge is what they must discern between real, conceived and even self-inflicted aggressions, but without a doubt, this represents the umpteenth attack on the body of prison officials by the Interior, because they ensure the rights of prisoners. Prisoners would not have to suppose that an official ends up being investigated in a case of abuse without evidence or injuries, but that only the naked accusation of the inmate is enough.

Listing the Human rights, the Constitution Española and the Penal Code the General Secretariat of Penitentiary Institutions develops a meticulous protocol that tries to cover all the possibilities of complaint, damages, means of proof and deadlines to bring the prisoner’s complaint to the court, but in the six-page document signed by the deputy director general Jose Maria Peña Peña there is not a single gap in which the presumption of innocence of the prison workers accused of having mistreated an inmate can be mentioned.

A prison worker has valued for this newspaper the feeling that this order has provoked among her and her colleagues: «This instruction puts an end to the professionalism, the presumption of innocence, the truthfulness and the professionalism of the prison officials, including the personal data of the prisoners. themselves in a file of «torturers». And by the way, when our names enter a proceeding, whatever the outcome, when will we be erased from the system as accused of mistreating an inmate? We are the first to ask for the protection of the prisoners and for prosecution if any of us overreach. But that is very far from what this circular says ».

But that is not the only consequence of an instruction of this nature. I insist, the paper supports everything, but from now on, how should an official behave when he sees that a prisoner tries to gouge out the eyes of a comrade, or to kidnap and stab him, or to bite him? Well, at least hesitating when deciding to act because as these prisoners take for saying that they have been mistreated, the official immediately complicates his existence.