Home
World
More than 50,000 people call for a US military intervention in Cuba

More than 50,000 people call for a US military intervention in Cuba 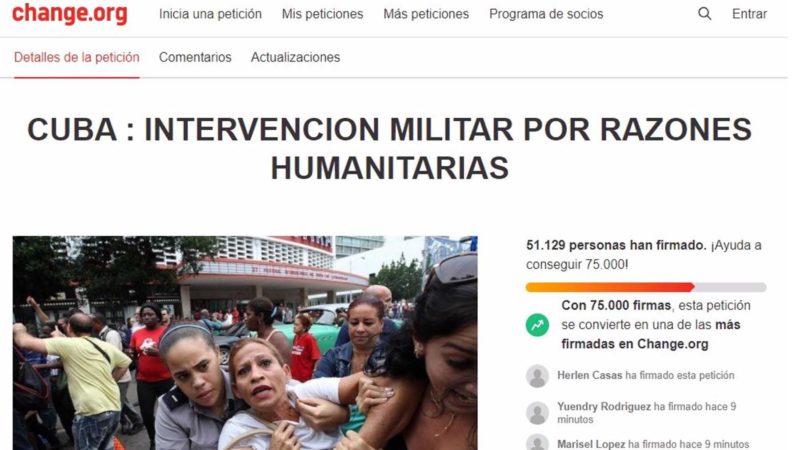 Cubans have taken to the streets this Sunday to protest against the Castro dictatorship. A spontaneous movement that has taken by surprise Diaz Canel, the replacement for dictators Fidel and Raúl Castro. Now, more than 50,000 have signed a petition addressed to US President Joe Biden in the face of a military intervention in Cuba.

“The free Cubans of the world ask without mistake for a military intervention by the United States and NATO to put an end to the Castro mafia and liberate the Cuban people who live submerged in terror, misery, hunger and coercion. We want a free and prosperous Cuba! Down with communism ”, reads the petition.

The person responsible for the proposal is Leo Juvier-Hendrickx, Cuban resident in Belgium and founder of the association in defense of Human Rights BelgoCuba.

The petition is addressed to Biden, the United States Congress, the Organization of American States (OAS), the United Nations (UN), the European Parliament (PE) and the North Atlantic Treaty Organization (NATO) and alleges humanitarian reasons for this.

The petition highlights “the unsustainable political, economic and humanitarian situation that the Cuban people have been living under the Castro regime for 62 years,” “the recognition by the international community that a terrorist and genocidal dictatorship reigns in Cuba.”

Faced with this situation, “the exile cannot continue to see how our brothers on the island die of hunger during a pandemic situation”, to which is added “the increase in repression against the Cuban people.”

On Sunday thousands of people took to the streets of the main cities of Cuba shouting “Freedom!” and “Cuba and life!” At the moment there is no news of violence.

The propaganda apparatus of the Cuban regime has been set in motion, once again to silence the protests. In addition to the repression of opponents in the streets, the Government of Havana prevented Internet access throughout the island. The videos of the peaceful demonstrations were disseminated through social networks, hitting the image of the dictatorship abroad.

The dictator Díaz Canel has also called on the less and less supporters of the regime to take to the streets and “defend” the revolution. This is nothing more than encouraging the confrontation between the Cubans themselves in order to maintain the armchair.

In the same sense, the international apparatus attached to the regime has been set in motion. In Spain, Podemos, a great defender of the Cuban and Venezuelan dictatorships, has kept silent in the face of the images of repression and a people who ask to live in freedom.