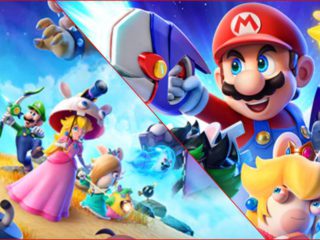 Mario + Rabbids: Sparks of Hope was one of the great surprises of E3 2021. Announced during the Ubisoft Forward conference for Nintendo Switch, the company has once again delegated to Ubisoft Milan the task of reconciling the Super Mario universe with that of the Rabbids in a turn-based strategy title that can be enjoyed by all audiences. MeriStation has interviewed Davide Soliani, creative director of the studio, and Cristina Nana associate producer, to learn more about the long-awaited project.

First of all, it is confirmed that Mario + Rabbids: Sparks of Hope will have real-time components this time. The controls will continue to be in turns, but there will be a dynamic nuance when it comes to control the characters, what they will move directly with freedom of movement to the given square; no from box to box.

The influences of Super Mario Galaxy they are not by chance. “It is a much larger, more ambitious project. We knew we had to create something new. Since then we had much bigger ambitions, and we decided to set the adventure in space precisely to give it a galactic, cosmic tone, to do a far-reaching adventure. We take influences from Super Mario Galaxy”, Says Soliani.

On the other hand, team management. We know that there will be characters like Mario, Luigi, Princess Peach, Rabbid Luigi, Rabbid Rosalina / Estela and more in teams of three participants. In total, there will be nine selectable characters. En Sparks of Hope there will be no restrictions when forming teams; it will no longer be necessary for there to be components from both universes. Therefore, we can have a team of only Rabbid characters if we want to.

Finally, the camera. While the game will be much larger and more open – it will not be an open world – Ubisoft Milan confirms that there will be free camera So what the structure of the scenarios will gain in amplitude. They will avoid the corridors that we could appreciate in the mobility between scenarios of the first installment.

Mario + Rabbids: Sparks of Hope will put the accent on exploration and adventure in their scenarios away from the fighting. Soon we will know more details and news implemented in a sequel that is, above all, more ambitious. The game will go on sale sometime during the year 2022 exclusively for Nintendo Switch. You can read our analysis of the original game, which we liked a lot, through this link.