No more search engine auctions for Android: Google is giving up pay-to-play 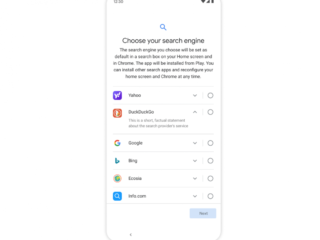 From September all search engines that want to appear in the selection screen on Android devices – without having to pay Google for them. Apparently the EU Commission put pressure on the search engine giant, which is also responsible for Android. So far, other providers had to bid in auctions to be displayed in a selection menu. That was called pay-to-play. Only the four highest bidders were then given a place.

Google writes in a blog post that an agreement has been reached with the commission. The longstanding cooperation is emphasized, which has always been about creating as much selection as possible on Android devices, but at the same time ensuring that Android can continue to be offered free of charge – that is, Google generates sufficient income.

The auction follows the abuse

The procedure at the auctions was a problem for the competitors and the commission. This was preceded by the accusation that Google was abusing its own operating system in order to favor its own search. The resulting process was the auctions. According to Google, a way to open up to other search engine providers. For this rather rip off. Ecosia CEO Christian Kroll explains the current development: “Search providers now have the chance to compete more fairly on the Android market based on the attractiveness of their product, instead of being excluded by monopoly behavior.”

Ecosia, DuckDuckGo, Lilo, Qwant and Seznam had turned to the EU Competition Commissioner, Margrethe Vestager – and thus against Google’s actions. Google says: “After we have received further feedback from the Commission, we are making final changes to the choice screen. This includes making participation free for eligible search engines.” There is no need to worry about the competition because Google does not prevail because there are no alternatives, but because they are the best search engine.