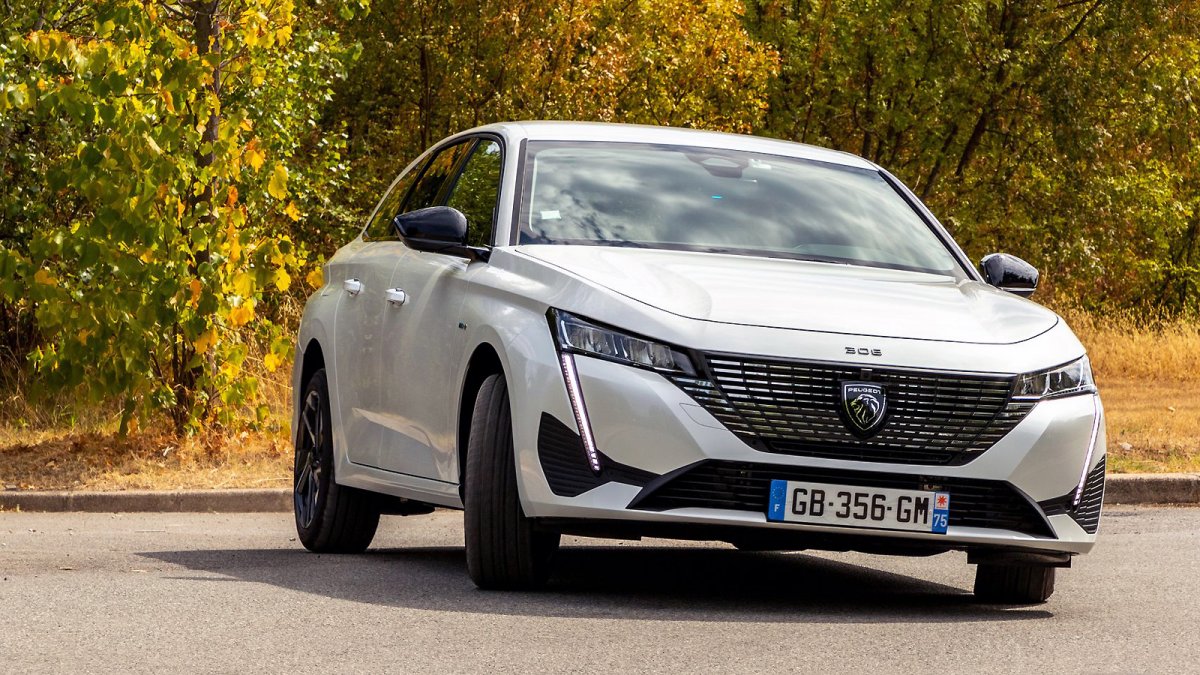 The model policy of automakers is sometimes difficult to understand, and Stellantis is a good example of this. The small cars and small SUVs that are available with combustion engines and e-drives are currently selling extremely well as electric vehicles. In some cases there are considerable delivery times. So it would have been obvious to also provide an electric drive for the new edition of the Peugeot 308 and Opel Astra, which will be based on one base in the future. But at least for the time being, two plug-in hybrids have to be enough. The slightly less powerful version was available to us for a first trip in the Peugeot 308 SW.

Externally, the new 308 clearly differs from its predecessor. The angular nose it has in common with the next Astra, the estate rear with numerous furrows, beads and folds looks idiosyncratic. With a little less of both, it might not be quite as fashionable, but it would certainly be more elegant. Well, the latter is not a priority in car design right now. The 308 SW is just under 4.64 m long, the wheelbase is 2.73 m. That promises a decent amount of space, and that’s the way it is: the station wagon can comfortably accommodate four adults, provided they are not all giants.

The trunk is 608 liters in the models with the only combustion engine, in the plug-in hybrid it is still 548. You have to classify these numbers a bit to properly appreciate the performance of Stellantis in this regard: the slightly longer Skoda Octavia 1.4[]TSI iV Combi holds 490 liters, the technically exciting Renault Mégane Grandtour E-Tech Plug-in 160 offers 447 liters. Even the much larger VW Passat GTE Variant (test) has 483 liters less space in the luggage compartment than Peugeot promises.

The dashboard also has a very distinctive touch. Peugeot and Opel basically serve different tastes here – just like the Peugeot 208 and Opel Corsa (test). The 308 also has many edges at this point, although Peugeot has not neglected ergonomics due to sheer obstinacy: there are useful shelves, and operation is intuitive in many areas. The number of buttons on the steering wheel has been chosen sensibly, the French do not take part in the touch mode on the steering wheel. It is different with the large infotainment system: There the menu buttons are designed as touch surfaces. They cannot be freely assigned, but they are still helpful.

The Peugeot is also furnished independently in the interior. The operation is still largely functional.

The small selector slide for the automatic transmission is reminiscent of Volkswagen and appears much more elegant than the previous sausage shape. Why the little steering wheel above takes getting used to and had to be flattened at the bottom, we don’t know, at least after a few kilometers it hardly bothers us. It is much more important that the workmanship makes an overall routine impression. We noticed one exception: in the test car there was an ugly gap between the dashboard and the door panel.

The chassis of the 308 SW is designed to be comfortable, and here too, Opel and Peugeot are apparently going different ways. The pre-production Astra that we were able to move was set up considerably more tightly than the 308. It leans significantly when cornering quickly. In return, it hides small and large bumps in the road quite skillfully. The steering could respond more directly and provide more feedback. Stellantis should also work a little on the response of the brake: there is only a very short pedal travel between weak deceleration and heavy braking. It takes a little getting used to to hit the pressure point exactly.

The first price list for the 308 SW includes two petrol engines (81 and 96 kW), one diesel (96 kW) and two plug-in hybrids with a system output of 133 and 165 kW. The more powerful combustion engines are also available with an eight-speed automatic for an extra charge of 2000 euros. We anticipate that both the Astra and the 308 will probably also be available with a battery-electric drive in the course of the coming year. Presumably they will get a further development of what Stellantis is currently installing in so many electric cars. We expect at least 110 kW motor power, 60 kWh battery and 125 kW DC charging power. Stellantis itself is currently not looking into the cards.

The two plug-in hybrids can already be ordered, the different outputs of which are scaled via the combustion engine. The electric motor in the eight-speed gearbox has an output of 81 kW, the 1.6-liter gasoline engine 110 or 133 kW. Accordingly, the system output, which is also not the sum of the individual outputs, is 133 or 165 kW. The system torque of 360 Nm is identical in both. The quite considerable difference in performance – in the old currency we’re talking about 44 hp – is hardly noticeable in the driving performance. 7.6 instead of 7.7 seconds should probably not be decisive for anyone, 235 instead of 225 km / h probably just as little. Even with the 133 kW PHEV, the 308 is very well equipped and accelerates powerfully.