Record sowing: a campaign of 38.7 million hectares is projected 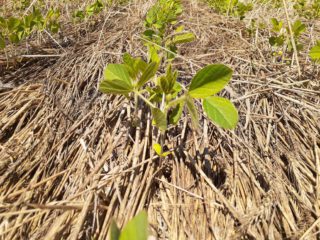 The Argentine agricultural area would reach a historical record of 38.7 million hectares, 500 thousand more than the previous cycle, as estimated by the Rosario Stock Exchange (BCR), whose analysts Federico Di Yenno and Emilcé Terré explained that the productive commitment is driven by the improvement in international prices.

In the 2020/21 season, the weather conditions were mostly unfavorable for the development of winter crops, while a moisture deficit combined with high temperatures in February and March of this year reduced soybean quintals, forcing to adjust to the harvest estimate lowers it.

Thus, the total grain production for the 2020/21 season was 6% below the previous cycle, totaling 127.7 million tons. The area dedicated to the production of grains and oilseeds in Argentina was 38.2 million hectares (M Ha), according to the latest adjustments made to the campaign.

The 2020/21 cycle ended with a record Corn sowing of 7.4 M ha. For the 2021/22 campaign, the intention of the cereal once again reaches an absolute record of 7,7 M ha. According to the analysis of the Strategic Guide for Agriculture (GEA), the expected growth in the planted area varies according to the province, although there is an important and generalized bet of the producers for the crop. It is very likely that the technological package used for the 2021/22 campaign will greatly improve.

According to the surveys, there would be a tendency to add more batches with state-of-the-art technological management, which could keep improving average yields, as long as the climate is favorable to the crop. In this way, an interannual growth in the cultivated area of ​​4.6% is estimated. With a yields an average of 80.4 qq / ha, the estimated productive horizon is 54 Mt, that is 5% more volume than the record productive achieved in 2018/19 and 2019/20 (both campaigns obtained a harvest of 51.5 Mt).

The trend observed in recent years in terms of crop participation is here to stay. Year after year corn grows, wheat grows and the queen of Argentine fields, soybeans, loses presence in the total hectares planted. In this way, a reduction in the hectares planted with soybeans is expected by 250 thousand ha, totaling 16.65 M ha, which is projected as the lowest value in the last 15 years. This value may continue to adjust downward in the coming months.

This trend is strengthened in the main productive areas of the Pampas region, especially in areas where the lack of water had a very negative effect on soybean yields and, on the other hand, showed a better performance than expected in corn. When comparing the production margins for the different crops, early corn in the core region is the one with the best margin, according to GEA data. The double wheat / soybean crop ranks second, while early soybeans remain last in terms of net margin.

The growth in corn yields and the better price / input ratio of the cereal favor its production, subtracting hectares of sowing from the oilseed. From 20 M Ha that were planted with soybeans seven years ago, the crop has lost surface year after year until the 17 M ha barrier has been pierced in the current 2020/21 cycle.

For the 2021/22 season, the area sown to wheat is expected to increase by 3%. The water conditions and the price scenario this year are much better than last year at the same date. The last rains consolidated the intention of sowing in a large part of the Pampean region. With 27% planted, the wheat is directed to the target sowing area of ​​6.7 M ha.

In this context, Argentina intends to achieve a wheat production of 20 Mt, which would mark a new historical record for winter cereal. This figure arises from taking into account area losses of around 200,000 ha and the national average yield of the last 5 years: 31 qq / ha. Córdoba would take advantage of having more water in its profiles, especially in the eastern and southern provinces, recovering the area that it was unable to cultivate last year, with 14% more area dedicated to wheat.

However, the lack of rainfall continues to be a major challenge for some areas, and plantings are halted in the center and north of the province. The area planted in Buenos Aires would fall by almost 10% in benefit of barley, although the recovery of edaphic moisture in the north of the province stands out, which could add wheat intent. In Santa Fe, a 5% growth in the implanted area is anticipated, although it is not ruled out that it could be higher, after the last rains. Santa Fe this year would reach the highest level of wheat sowing in its history, surpassing its previous record, that of last year with 1.19 M ha cultivated.

Continuing with the analysis of margins, for the next season a substantial increase in the area planted with sunflower is projected. The 2020/21 cycle left meager results for the oilseed in terms of yield in many areas of the country. As a consequence, the lowest production in the last 5 years was obtained. Looking at the 2021/22 season, the producer’s gross margins are well above other years. Despite the production problems that emerged in recent seasons, the more attractive prices observed since the end of 2020 are expected to boost sunflower plantings this year.

Thus, Argentine seeders are expected to cover a total of 38.7 million hectares in the 2021/22 season, half a million hectares or 1% more than the previous cycle. If materialized, this planted area would be the largest in history, surpassing by almost 250,000 hectares the best mark achieved in the 2019/20 campaign. The improvement in international prices in the first half of the year, which brought the reference prices to the highest in around a decade, has played a fundamental role in improving profitability in marginal lots and encouraging their sowing.

Assuming trend yields, the national production could reach a historical record of 140 million tons, anchored mainly in the recovery of the production of wheat, sunflower and the new impulse of corn.

Finally, the monthly income of trucks loading grain to the Gran Rosario terminals is projected. The table below foresees the arrival of trucks to industries and ports of Gran Rosario in the period Jul’21-May’22, considering the entry of a large part of the 2021/22 harvests. The projections presented are based on the expected real entry of the trucks to the Gran Rosario terminals. It should be taken into account, however, that grain delivery companies compute the entry of merchandise until 06:00 am, so the number in their records would be significantly lower. The indicator is corrected for the discrepancy in each campaign, assuming that the difference between demand and the arrival of trucks is the same in all months of the year.