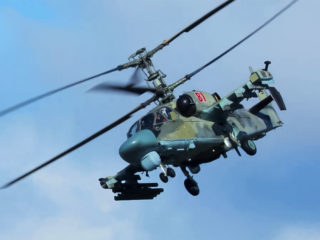 “During a work trip to the testing ground of the Ministry of Defense in the town of Smólino, the Deputy Minister of Defense verified the progress in the implementation of the state weapons program. The Deputy Minister was also presented with a modernized reconnaissance and attack helicopter Ka- 52M equipped with a new guided weapons system, “the ministry said in a statement.

In addition, Krivoruchko evaluated the capabilities at various ranges of new artillery systems: the Magnolia, Malva, Flox and Lotos self-propelled guns, as well as a Sprut self-propelled anti-tank gun.

In this context, it is worth recalling a recent video of the tests of the updated Vijr-1 air-to-ground guided anti-tank missile launched from a Kamov Ka-52 helicopter that was published by the Kalashnikov Defense Consortium.

The Vijr-1 is designed for use by Su-25T and Su-39 attack aircraft and Ka-50 and Ka-52 helicopters, and can also be launched from warships and small patrol boats.

According to its developers, this anti-tank missile is capable of piercing homogeneous armor with a thickness of 750 millimeters behind reactive armor.