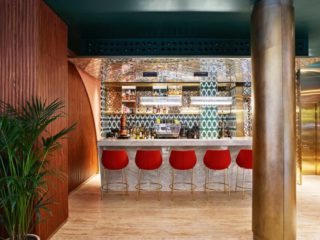 The Creative Team adds a new international recognition for its design at Kimpton Vividora. Last year the hotel received the Best Hotel Interior Spain award from the prestigious International Property Awards and was a finalist in the Fx Design Awards 2020, in the Best International Hotel category.

The design made in Kimpton Vividora Hotel It comprises both handicrafts, brands and local art as well as colorful patterns on ceramic pieces and a reinterpretation of its historical past. All this mixed with a contemporary approach and a spontaneous look that give the hotel a unique and energetic personality.

Kimpton Vividora, the first hotel in Spain by Kimpton Hotels & Restaurants and the first luxury hotel in Barcelona by IHG, has just opened its doors in the heart of Barcelona, ​​presenting a modern and revolutionary luxury that merges with the dynamic culture and artistic character of the Gothic Quarter, to offer getaways full of vibrant experiences for both locals and international travelers.

Adjusting to the new normal, Kimpton Vividora offers proposals that invite you to live unique experiences. As a novelty, the hotel presents Terraza de Vivi, its rooftop bar, a few floors above the bustling activity of the surrounding streets, surrounded by a quiet atmosphere created by details of lush vegetation, where to enjoy refreshing cocktails and tapas and where to find the intimate urban oasis of the top-floor pool.

Since Vivi Terrace, guests and the local public will be able to enjoy its magnificent 360º views of Barcelona. The Creative Team faced a great challenge when it designed Vividora Hotel: It had to follow the philosophy of Kimpton hotels, where genuine, local experiences are lived, while offering “luxury without the attitude”. 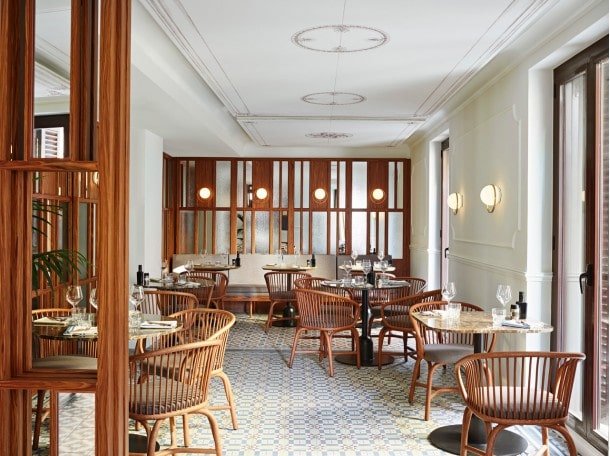 The design strategy of the study was based on creating a dialogue between the Hotel and Barcelona, ​​specifically, with the neighborhood in which it is located, Ciutat Bella. The space had to reflect the lifestyle and architecture of Barcelona. What’s more, It was necessary to create differentiated and unique spaces, in which both guests and locals met and could interact. One of the elements that stands out is the layout of the hotel lobby, located on a mezzanine and connected to the bar through a double-height space on the façade. This void is filled with a cascade of glass lamps that bring an aquatic glow effect to the space, while vertically connecting the two heights.

Three round stones, each with a different stone finish, act as the three reception desks, referring to the stone fountains so typical of the courtyards of the Gothic Quarter.. The lobby space is completed with a lounge area and a coworking table, which invites locals to enter the hotel. 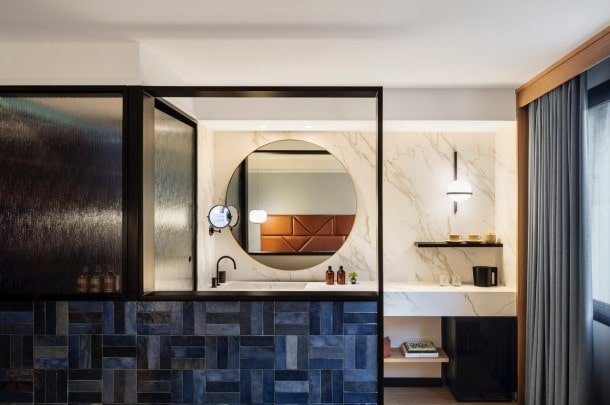 When designing the rooms, The Creative Team was inspired by the colors that define the city of Barcelona: the warm terracotta tones of its architecture and the cool blue tones of the Mediterranean Sea. As if it were an abstract composition, the two blocks of color were introduced as protagonists of Vividora’s rooms: the warm leather headboard in the seating area as opposed to cooler and bluish handcrafted ceramic dividers in the bathroom area, which visually transport the guest to the sea, very close to the hotel.

Another game of contrasts related to the city, which The Creative Team has introduced in the rooms, is formed by the warm floor that provides the wooden surface of the rest area, in counterpoint with the cool stone surfaces of the water zone.

The design strategy applied by El Equipo Creativo in these spaces is similar to that recreated in the rooms in terms of color, temperature, materials and games of contrasts. However, there are enhanced comfort features: such as a stylish living room, the wonderful experience of taking a bathroom next to the private balcony, or enjoy the spectacular views of the city from the highest floor of the building. FOOD & BEVERAGE CAFÉ GOT, at the Kimpton Vividora Hotel, is located at street level and with a long façade that integrates it and makes it part of the Gothic Quarter. It is precisely this area of ​​Barcelona, ​​made up of small pedestrian alleys that lead to squares and entrance patios to old residential buildings, is what inspires THE CREATIVE TEAM in the design of this space.

Stone, vegetation and water are the essential ingredients of these cool oases within the city, and for this reason it was decided to introduce these same ingredients in the design of the cafe. CAFÉ GOT is located in a double-height space that connects to the lobby, located on an upper mezzanine, and provides a fresh effect with an aquatic touch, thanks to a cascade of glass lamps. Under this double height, a comfortable living room is located, next to the facade and visible from the street, which invites guests and locals to come in and relax.

The greenish ceramic pieces with geometric patterns stand out that were designed exclusively for the hotel and that are inspired by the extensive ceramic artisan tradition of the region. They have been placed on the walls, as filters between zones, and in combination with plants that intensify the greenery of the space, while providing a touch of freshness. The bar sits discreetly at the back of the café, materializing as an elegant block of shiny stone in contrast to the travertine flooring.. The rugs, also specially designed for the project, together with the terracotta walls and reddish wood finishes, create a warm contrast in the space.

For its part, THE FAUNA RESTAURANT is inspired by a typical Barcelonan house. The idea arose when EL EQUIPO CREATIVO, due to the reduced space that the hotel had at street level, decided to locate the restaurant on the second level of the building and thus turn it into an intimate and private space, which would be like going to dinner at friend’s house. Clients enter the space through a floor made of ceramic pieces, with a certain intensity of color and changing patterns, which transports them to one of the most characteristic elements of the traditional house in Barcelona.

As part of the same strategy, EL EQUIPO CREATIVO made the ceilings hand painted, with graphics inspired by traditional decorative ceilings. Home kitchens and pantries are also referenced in FAUNA RESTAURANT. At the entrance, the breakfast buffet area welcomes you through hand-painted bluish ceramic pieces that represent scenes from the Old City of Barcelona. Acting as a counterpoint, the restaurant’s other pole of activity is the open kitchen, at the back, which has a warm wooden atmosphere reminiscent of traditional kitchens.