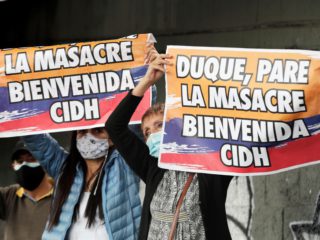 At the same time that on the 17th floor of an emblematic hotel in Bogotá, dozens of victims of police violence offered their testimonies to a team of the Inter-American Commission on Human Rights (IACHR) -and other citizens did so in Cali and Popayán- representatives of That organ of the Organization of American States (OAS) received from President Iván Duque the government report on the month of national strike, a document that details cases of looting, vandalism and roadblocks. This is how the long-awaited official visit of this commission to Colombia began on Tuesday to evaluate the complaints of human rights violations during the protests in Colombia. The social outbreak that began on April 28 has already left half a hundred dead, at least 90 missing and 2,000 injured among civilians and police.

“In meeting with [la] CIDH enfatizamos en que [el] Government protects peaceful protest. Vandalism and blockades are not part of the right to protest. In defense of citizen rights, ESMAD (Mobile Anti-Riot Squad) must intervene, in a proportional manner and respecting human rights, ”said Foreign Minister Marta Lucía Ramírez at the end of the meeting on Tuesday. Senior government officials met with Antonia Urrejola, the president of the IACHR; María Claudia Pulido, the Deputy Executive Secretary for Monitoring, Technical Cooperation and Training, and with Pedro Vaca, the Special Rapporteur for Freedom of Expression.

“For us, the fundamental thing in this visit is to be able to listen to all sectors, to be able to have a broad and comprehensive vision of what has been happening in Colombia in recent weeks. From there, make a set of recommendations, ”said Urrejola, indicating that the blockades and the right to social protest will also be at the center of the meetings. On Sunday, dozens of people took to the streets around the Bogotá airport to welcome the Commission.

The historic visit of the IACHR to Colombia took place after the initial rejection of the government of Iván Duque, which did not consider it necessary. After receiving criticism from the international community and the resignation of the Minister of Foreign Affairs, the Executive appointed Vice President Ramírez as the new Foreign Minister, launched a diplomatic offensive in the United States and accepted the IACHR’s visit, albeit with conditions. Originally it was an on-site visit, in the places where complaints have been made, but in the end a shorter working visit was agreed with fewer commissioners. This Tuesday, Duque had a private session with the president of the IACHR and expressed his willingness to give her access to all the information they require, the chancellor reported.

The delegation also met with the Minister of Defense, Diego Molano, and the Director of Police, Jorge Vargas. These two institutions concentrate the majority of complaints of abuse. The police opened 160 disciplinary investigations against their agents, but both the opposition and the protesters demand that these cases not be investigated by the military criminal justice and that the institution depends on the Ministry of the Interior and not the Ministry of Defense, since social protest does not it must be treated as a war. In recent days, Duque announced a reform of that security body that includes a change in its general inspection and a mechanism to receive citizen complaints, among other measures. However, the president kept the police under the authority of the Ministry of Defense. “[La CIDH] It appreciates the space and the information received, which will be analyzed in accordance with inter-American standards of human rights and its autonomy, ”said the body through its account on the social network Twitter.

The arrival of the Commission comes after six weeks of protests and the failed attempt to negotiate between the Government and the National Unemployment Committee. This weekend, the committee – made up of the workers’ centrals – unilaterally stood up from the talks and argued that the Executive is not really interested and has “purposely delayed the negotiation of the Emergency Document.” The Committee demanded a preliminary agreement on minimum guarantees for peaceful social protest and the elimination of the decree of military assistance. According to his delegates, this had been achieved but the Executive changed his mind. That is why – they assured – they will deliver the document to the IACHR.

Although the demonstrations have been mostly peaceful, since their beginning, on April 28, excesses of the public force have been reported, the use of firearms and other weapons considered non-lethal used without respecting the protocols, as well as the presence of civilians. armed men escorted by agents who have been caught on video. The counselor for Human Rights of the Government, Nancy Patricia Gutiérrez, has said that the message they gave to the IACHR is that “Colombia is not a country that violates human rights” and that the “difficulties we face with the justice system from the country”. For the Chancellor, justice must investigate both those who “in a minority” have taken advantage of legitimate protest to destroy and loot; but also to members of the public force who “have exceeded their functions or who have committed some type of abuse of authority or violation of human rights.” For now, according to figures from the Prosecutor’s Office, of the 51 confirmed deaths related to the protest, only four homicides have been clarified and two of them are being investigated by the military justice system.