The same marriage project advances in Chile: the Senate gave it a half sanction 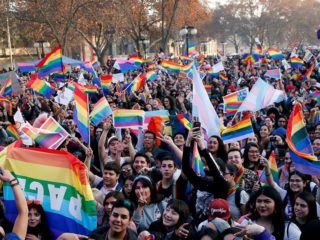 The Senate of Chile approved this Wednesday the bill of equality marriage. The initiative has now passed to the Chamber of Deputies, which has not yet set a date for its treatment. If approved in both chambers, Chile will join Argentina, Brazil, Colombia, Ecuador, Uruguay, the only countries in the region to authorize the union between people of the same sex.

The advance of the project, in a country that has always been characterized by more conservative positions, was possible after the impulse given by the right-wing president himself Sebastian Piñera.

However, most of the senators in the governing coalition opposed the implementation of the new law.

“The time for equal marriage has come”, said Piñera in his public account before Congress on June 1. The announcement then surprised his entire governing coalition.

The regulations of the project that regulate equal marriage and those related to filiation were validated by a comfortable majority, reported AFP. The project entered Parliament in 2017, following an initiative by former Socialist President Michelle Bachelet.

The Bachelet government approved a Civil Union Agreement, which allows homosexual couples to access almost all the rights stipulated by marriage, but denies the possibility of adoption for same-sex couples. The initiative currently in Congress ends this situation.

“When the project is approved first and second category couples will cease to exist in our country”Said the spokesman for the Homosexual Integration and Liberation Movement (Movilh), Óscar Rementería.

What the project says

The law seeks to equalize rights and obligations regardless of the sex of the people who make up the marriage. The new law, if approved by Deputies, applies the category of “marriage” without distinction.

“The equal marriage bill is really looking for the current traditional marriage to be extended to same-sex couples, with the same name, the same obligations and with the same rights. Without any type of distinction, they are couples of the same or different sex, ”said the Movilh spokesman.

The new regulations will also allow the adoption and parental affiliation of children to be guaranteed for homosexual couples.

Rementería said that this represents a change for same-sex couples, but also for their future children, since with the current Civil Union Agreement it is not possible to “apply to the field of adoptions in family courts, because the law does not recognize them as a couple despite the fact that the State does ”.

This change will also apply when registering the child’s parents or legal guardians, who until now could not be both. “There is a problem with the rights of filiation between children and parents, that is, the relationship that a boy or a girl may have in order to have a father, a mother, two fathers or two mothers,” said Rementería.