VIDEOS, PHOTOS: A woman defends herself against an alligator, pushing it with an oar, while sailing on her board 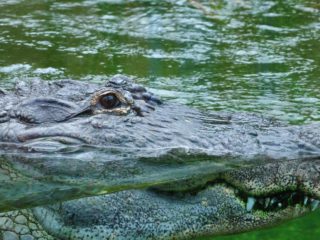 Vicki Reamy Baker, from the state of Florida (USA), recorded the moment in which she had to defend herself from an alligator, pushing it with an oar, while sailing in a pond in early September. The woman posted some photos and videos of what happened on her Facebook account.

“What are you doing? Get away from me! Oh shit! No, get away!” Says Baker on one of the tapes, as the crocodile walks over to his board. The woman, who remains calm and does not scream, uses her shovel to push away the animal that makes a hissing sound.

Despite Baker’s attempts to break away from the alligator, it continued to swim nearby. “Why are you chasing me? Why are you trying to bite me? Never before has an alligator come after me like this. […] He came for me and tried to bite my paddle board, “the woman is heard, who also assumed that someone had fed the crocodile, making it very dangerous.

Finally, Baker and the animal moved away from each other without the incident happening to greater.