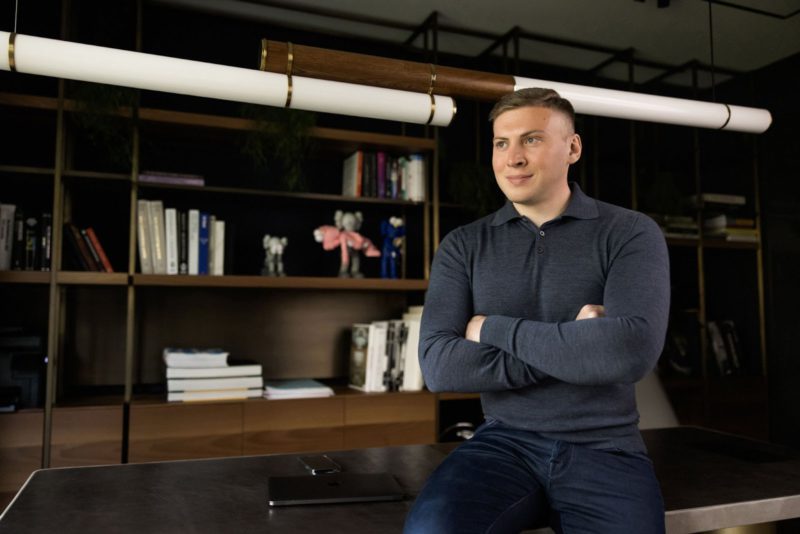 Since his student times, Ruslan Tymofieiev (Ruslan Timofeev) liked different educational smartphone apps. One of them offered him to memorize a dozen new English words per day in a playful way. As he recalls, another app helped him to train oral counting and the third one trained his skills in solving logic problems. All of the above-mentioned applications relate to EdTech, a field of digital tools for learning and self-development. Even educational YouTube channels can be classified as EdTech. Now, Ruslan Tymofieiev is an IT investor and the founder of venture capital fund Adventures Lab. And EdTech is one of the areas that Tymofieiev admits to being the most interesting to follow as an investor.

The global EdTech market is growing rapidly every year. Digital services—from online translators and grammar proofreaders to online learning platforms—are in demand by people with a passion for self-education. The Covid-19 pandemic has affected a lot this area: millions of people started to learn new things, being locked down within four walls during the qauarantine.

In this direction, Ukraine is still at square one. Tymofieiev admits that there are excellent EdTech startups in Ukraine, such as “rock star” Grammarly and the growing by leaps and bounds Preply. However, as the Adventures Lab founder notes, Ukrainian investors are still skeptical about investing in digital education.

A cocktail of serfdom and bureaucracy

Last year, the investment fund Adventures Lab financed Belarusian startup EduDo. The founders came up with a service like TikTok that allows users to upload informative three-minute videos. By watching such videos, people can study different disciplines, and then consolidate what they have mastered by filling out a mini-test. Ruslan Tymofieiev got interested in the project’s idea as he also made time for self-study every day. He considered education through video to be convenient, practical, and modern. For this reason, Chinese media startup ByteDance has recently taken to filling TikTok with popular science content. The representative of the company Sachin Sharma emphasized in one of the interviews that the request came directly from users. That is, the initiative comes from the bottom. How can this be explained?

According to research by analysts at McKinsey, Generation Z considers education to be one of the best investments. Therefore, modern youth strives for self-development. But unlike previous generations, they approach this issue pragmatically. The school curriculum does not properly develop critical thinking, offering only memorizing large amounts of information. One friend of the investor, who had previously taught at school for a long time, once formulated an accurate insight: “Today’s school education is a terrible mixture of serfdom and bureaucracy. They teach you to memorize as much information as possible and to be obedient. There is no place for creativity, uncomfortable questions, curiosity, free-thinking.” Ruslan Tymofieiev says that people endured it somehow. And today’s teenagers no longer want to bother with what will not be useful in adult life.

Ruslan Tymofieiev draws attention to Ukrainian schoolchildren. They take IT courses and study languages because this will ensure their success in the modern multicultural world. At the same time, not all schools are capable of providing an in-depth study of English. EdTech digital tools help solve this and other problems. As an example of this trend, the investor mentions the TOP-100 Eastern European EdTech-startups 2020 rating by analytical company HolonIQ, where out of 11 Ukrainian projects presented in the list four are English language learning services.

Pandemic as an engine for growth

EdTech attracts not only users but also investors. This is convincingly evidenced by statistics. By 2027, according to the Market Study Report, the global EdTech technology market will grow to $318.8 billion. And experts from HolonIQ have calculated that in three years the total volume of the global education market will amount to $7.3 trillion.

Ruslan Tymofieiev cited the statistics for the IT investments. If in 2017 the total amount of investments in the digital educational segment was equal to $9.5 billion (it was a record at that time), then in 2020 it was already more than $16 billion: China more than 60%, USA 15%, India 14 %, Europe 5%. China’s leadership is likely to remain.

One of the factors empowering the rapid rise of the industry today is the digitalization of school and university education. This process began gradually even before the pandemic outbreak. But it was at the peak of the quarantine that online learning programs became necessary for everyone, everywhere. In this regard, the investor mentions Zhejiang University, where more than 5,000 online courses were launched within just fourteen days and all of them completely switched to a remote working model, almost without interrupting the educational process.

In addition to the pandemic and remote working, Tymofieiev mentions other important development drivers of EdTech: the widespread adoption of cloud services and storage, Artificial Intelligence development, machine learning, and virtual and augmented reality tools. And, of course, the spread of high-speed Internet. By 2025, the total number of users of the worldwide network on the planet will be more than 6 billion people—this is 77% of the world’s population.

What to invest in?

Before funding a start-up, analysts from Adventures Lab scrutinize its niche. Ruslan Tymofieiev (Ruslan Timofeev) believes, there are four promising lines of business in EdTech that are going to become particularly relevant for investors shortly.

Gamification of learning. As Tymofieiev explains, developers of educational platforms certainly know that when choosing between a school lesson and a game, a teenager will definitely prefer the game. That is why such platforms offer students to learn important things in a game mode. This is not a recent tendency and it will be up-to-date for a long time attracting investors and users. For instance, Norwegian educational startup Kahoot! is used by more than 70 million unique users. Project GIOS has been launched in Ukraine recently. It is an online math course to prepare for external independent evaluation made as a videogame. This start-up attracted a $400,000 investment and the number of its users raised 10 times during a quarantine.

Cybersecurity. According to Check Point Software Technologies, cyber scammers attacked educational services more than 1700 times per week during June 2021. Online platforms in India, Australia, Italy, Turkey, and Israel were the most severely affected by scammers. A year ago, the media informed about such cyberattacks in the USA. A hack of one of the Indian EdTech companies led to a leak of information: data of 75 million clients (names, phone numbers, addresses, personal accounts) was on public access for two weeks.

VR and AR. According to HolonIQ, expenses on virtual reality in EdTech would be more than $12 billion by 2025. Expenses on Artificial Intelligence would be more than $6 billion, on robotics – more than $3 billion. As an example of this trend, Ruslan Tymofieiev talks about Historic Environment Scotland that a few weeks ago presented a virtual tour on a Late Stone Age settlement Skara Brae on the Orkney archipelago. A volumetric model of the settlement was created with help of laser scanning and a photogrammetry method. Scientists say the project allows not only to see the lifestyle of the people in the ancient time but also observe the influence of climate on their everyday lives. At the beginning of the month, Nearpod start-up organized a virtual excursion to Pearl Harbor for American schoolchildren. It was dedicated to the 7th of December, a date when the USA entered the Second World War. All these activities are possible thanks to VR/AR technologies in EdTech.

Individualization of education. Do you remember a picture with a fish, an elephant, and a seal that are asked to climb a tree? There is a caption under the picture: “Our education system.” All of us have different abilities, talents, and levels of training. It means that the educational process must be customized. The founder of Adventures Lab exemplifies a platform called Century Tech that is based on Artificial Intelligence and was recently launched and implemented in Belgium. It allows figuring out students` preferences, the overall education and general knowledge levels, the abilities of the students and their weaknesses. Based on this data, the platform allows creating a personal educational program according to the student`s goals. It is extremely important to focus on individual needs, and this helps to considerably increase the effectiveness of the educational process.

The world has changed: Prepare for lifelong learning

According to Ruslan Tymofieiev, the tendency that gains popularity and seems to shape our world of tomorrow is the concept of three L: Life-Long Learning. It means that a person turns their lifestyle into a permanent self-educational process. In contrast to old regulated educational forms (school and university), modern education becomes more diverse in forms and fractional and it lasts forever.

Suppose, the investor says, today you are studying programming, in several years you will start learning the Spanish language, and after that, you will be interested in directing films. EdTech technologies become an appropriate solution. This sphere offers flexible and multiple formats of getting knowledge and skills for every taste and requirement.

Experience has shown, formula “one profession for the whole life” (as our parents had) will expire soon. To reach success, a person needs to have multitasking skills and acquire new competencies. Ruslan Tymofieiev (Ruslan Timofeev) offers to think about 2020 that clearly showed that this kind of mobility can help reduce the risk of losing the opportunity to have an income. You have to learn and relearn a lot to keep up with modern life. EdTech will remain an increasing and profitable sphere, attractive to investors.